Like us on Facebook, follow us on Twitter! Check out our new tumblr page. :)
Manga News: Toriko has come to an end; but be sure to swing by and share your favourite moments from the series!
Manhwa & Manhua News: Check out the new Manhwa and Manhua shout-out (March 2016).
Event News: One Piece Awardshas concluded. Check the results Here!
MangaHelpers > Manga > Browse > Der Ring des Nibelungen - Siegfried
Home
Chapters
Translations
RSS 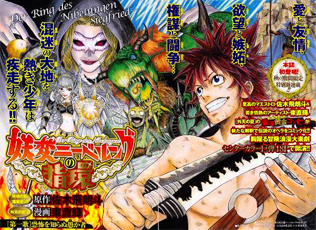 The story is set in a world were gods control the heavens, giants the earth, and nibelung (a strange looking race) the underground.

The main character (Sigurd) wanting to learn what fear is makes his entrance during a battle between the (almost extinct) humans and giants. Things weren't looking good until he pulls out a broken sword that scares even the giants. At the same time, a goddess descends along with a meteor shower.

What is the importance of the broken sword who can only be fixed by "the fool without fear"? What's the mission of the goddess on earth? Read this Norse mythology inspired story to find out...