Like us on Facebook, follow us on Twitter! Check out our new tumblr page. :)
Manga News: Toriko has come to an end; but be sure to swing by and share your favourite moments from the series!
Manhwa & Manhua News: Check out the new Manhwa and Manhua shout-out (March 2016).
Event News: One Piece Awardshas concluded. Check the results Here!
MangaHelpers > Manga > Browse > Girl Queen
Home
Chapters
Translations
RSS 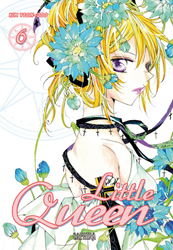 June Narcieo is a selfish and powerful (destroys and ruins pretty much every thing she come across) girl who has suddenly decided to become the Queen. Despite of many obstacles (yeah, right), she finally obtained the rod of the Queen. At the same time, she was told she'd have to give up something in order to keep the rod. Sejuru who happened to be a devil was something June had to give up. Although the situation was ended comically, I believe June will be given such a choice in future again.

For being the devil king is about to wake up, Sejuru became unstable and let his power go loose at times. It was questioned that how Sejuru who is a devil could stay in the Academy where devils are reject by a great seal...." [Janimes]