Like us on Facebook, follow us on Twitter! Check out our new tumblr page. :)
Manga News: Toriko has come to an end; but be sure to swing by and share your favourite moments from the series!
Manhwa & Manhua News: Check out the new Manhwa and Manhua shout-out (March 2016).
Event News: One Piece Awardshas concluded. Check the results Here!
MangaHelpers > Manga > Browse > Trinity Blood
Home
Chapters
Translations
Thread
RSS 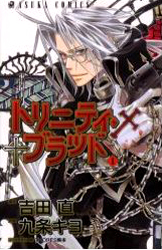 The background is in the distant future, a post-apocalyptic world after the destruction brought about by Armageddon. The war between humans (Terran) and vampires (Methuselah) continues, as a struggle between two factions: the Vatican and the New Human Empire.

Yet, amidst the bloodshed and violence, many desire a peaceful co-existence between the two species. However, standing between them and this goal is the Rosenkreuz Orden, a group of vampire extremists who manipulate the two sides and pit them against each other. To combat them, the Vatican special operations group "AX," led by Cardinal Caterina, must use everything they have - even a vampire who preys on the blood of other vampires.

of all the vampire related mangas i think that this one clearly is the best... Permalink " "