Like us on Facebook, follow us on Twitter! Check out our new tumblr page. :)
Manga News: Toriko has come to an end; but be sure to swing by and share your favourite moments from the series!
Manhwa & Manhua News: Check out the new Manhwa and Manhua shout-out (March 2016).
Event News: One Piece Awardshas concluded. Check the results Here!
MangaHelpers > Manga > Browse > Hyde and Closer
Home
Chapters
Translations
Thread
RSS 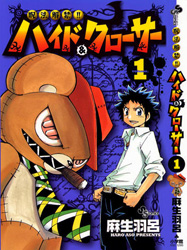 Shunpei Closer's grandfather, Alsyd Closer, was an odd man. He traveled around the world always coming back to Japan to tell his grandson all the amazing adventures he would have. Before leaving to Africa on Shunpei's 7th birthday, he gives him a teddy bear named Hyde. Six years have passed and one day Shunpei receives a mysterious package that contains a deadly surprise. To survive, he will learn more about his grandfather than he ever dared to dream and learn what it takes to be a real man, and not the coward he always thought it was all right to be. [From Endless Youth and Co.]

I guess you know I'm bored....:-P But I'm only pimping the best for my MH family!

Hyde and closer....It's an interesting read. People are quick to compare it to another coming of age tale 'Katekyo Hitman Reborn!' And I can see why they would. The scenarios are very similar, and so are the main characters. Yet there's something about Hyde that strikes itself from the very beginning as different.

It's clear that Asou didn't simply sit down and decide to do a series about battling toys simply because his teacher (He was an Assistant to Makoto (Gash bell!) Raiku if you didn't know.) did as well, it's clear from the types of toys and the splash pages on certain chapters that he did research, which really shows in the varied attacks and art for the characters. That alone would be worth a mention, but Asou goes on to make some memorable characters and situations.

Shunpei is similar to Tsuna at first, but one thing seperates them. Shunpei adapts quickly to his settings, and by the time the first volume comes to a close, he's more than willing to man up than Tsuna was at the same time. (Though to be fair Hyde did set itself out to be a much more serious affair than Reborn! at first.) By the time the manga has reached chapter 40, Shunpei is a different person. Reliable, determined, and most of all brave. Yet Asou doesn't skimp on character development to strengthen Shunpei, nor does he drag out battles simply to show how strong he's become.

It's also obvious that the series isn't afraid to get dark simply because of it's subject matter. I know not many have read the online chapters, but they're a far cry from the happy go lucky days of when it was running in Shounen Sunday's paper pages. Even with this though, Asou makes dynamic characters, who are similar to the ones seen in One piece. They come in different shapes and sizes, and all bring their own rational to the table. The series does follow the tired and true 'Enemy to friend' conversion, but don't be fooled into thinking that this makes the characters boring. In order to support the growth of Shunpei, the cast that surrounds him has to grow as well. This is something Asou does well, as each new character grows different from their interaction with him. One thing about them is the retrospective they take after the fact.

Don't let the similarity to Reborn turn you off from reading Hyde, as both stories may start similarily, but become as different as night and day very quickly. Hyde and Closer has what it takes to become a shounen classic, with a simple yet deep storyline, very likable characters, and art that reflects several aspects all around the world.

Could someone please translate the rest of this manga? Permalink " "