Like us on Facebook, follow us on Twitter! Check out our new tumblr page. :)
Manga News: Toriko has come to an end; but be sure to swing by and share your favourite moments from the series!
Manhwa & Manhua News: Check out the new Manhwa and Manhua shout-out (March 2016).
Event News: One Piece Awardshas concluded. Check the results Here!
MangaHelpers > Manga > Browse > Ichigo 100%
Home
Chapters
Translations
Thread
RSS 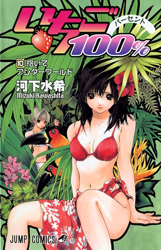 The hero (me, Junpei Manaka!) sneaks up to the roof to see the sunset. When he opens the door, he startles a mysterious beauty. She panics and runs away, but not before Junpei has caught sight of her adorable strawberry print panties...in EXTREME close-up. With that vision forever burned into his memory, Junpei embarks on a quest to find the girl, and the panties, of his dreams!

A HAREM WHERE ALL THE GIRLS HAVE A POTENTIAL CHANCE TO WIN!

Plot:
The story start off with a guy named Manaka Junpei, who is a pervert, much like the rest of the guys in the story. The story basically follows his aspirations of wanting to become a film director and his numerous love interests.

Characters:
Short and simple, every single male in this manga is a huge disgusting pervert. The notable exception to the bunch would be Amachi, but instead of being a pervert, he’s a stuck-up with huge ego rich boy. The other exception would be Higure the pastry chef, who is opposite of Amachi character traits and in a sense the “perfect gentlemen”.

The main girls of the story are likable, each with their own personality and approaches to Manaka heart.

Manaka Junpei: the main protagonist. He has numerous female interests, whom of almost all of them are in love with him, but due to his indecisive nature, he hurts most of them.

Toujo Aya: a shy smart girl who was inspired by Manaka to become a writer. The first girl Manaka met on the roof top with strawberry panties.

Nishino Tsukasa: a popular girl who loves to cook and was Manaka girlfriend in 3rd year of middle school. At that point she doesn’t have a dream, to call her own and went to different high school than Manaka.

Satsuki Kitaooji: The first girl who confessed to Manaka in beginning of high school. She is completely open with expressing her feelings and not afraid to show her thoughts (or her body for that matter).

Sotomura Hiroshi: Misuzu big brother, who is a really smart guy, but also biggest pervert in school (or the world for that matter). Sotomura met Manaka in high school and became a friend; Manaka could turn to for advice. Also has a sister complex.

Sotomura Misuzu: the sister of the Sotomura above. She is headstrong, smart and, by golly, knows how to get things done. She has interest in film directing as Manaka.

Yui: A childhood friend of Manaka who loves to eat, who Manaka treats as a little sister. She is the mediator for Manaka and the girls.

My Rating:
10/10. This series is a emotional roller coaster for me. I like all the girls and any them wouldn’t be a bad choice for the protagonist, if the other girls weren’t there to sway his decisions. There are strong connections to symbolism in this series, which makes you think who is destining to be together. The bad of reading this series is, you’ll have high standards after finishing this. If I was to compare other series, I would rate Suzuka at 7/10 and Love HIna at 8/10. Enjoy you guys~ Permalink " "