Like us on Facebook, follow us on Twitter! Check out our new tumblr page. :)
Manga News: Toriko has come to an end; but be sure to swing by and share your favourite moments from the series!
Manhwa & Manhua News: Check out the new Manhwa and Manhua shout-out (March 2016).
Event News: One Piece Awardshas concluded. Check the results Here!
MangaHelpers > Manga > Browse > Last Chance - Darkside Of Dreams
Home
Chapters
Translations
RSS 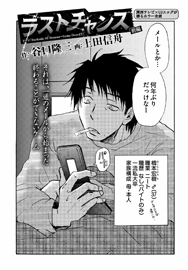 Hashimoto Hiroki is a loser. Graduating from one of the top colleges, he had his whole future to look forward to, but he's now 37 years old, with nothing close to a career and his last part time job was several months ago. He lives with his mom who works several jobs just to keep them afloat. One day while living his miserable life, he receives a mysterious text telling him that he is now in a game and the first task is to take out the trash. He realizes the house is a mess and does it only to find out he has received a reward. The text message states if he clears all 4 stages, his prize is $100,000 and 1 wish that grants any desire. The only problem is that the difficulty of the tasks skyrockets with each stage… [vyc]