Like us on Facebook, follow us on Twitter! Check out our new tumblr page. :)
Manga News: Toriko has come to an end; but be sure to swing by and share your favourite moments from the series!
Manhwa & Manhua News: Check out the new Manhwa and Manhua shout-out (March 2016).
Event News: One Piece Awardshas concluded. Check the results Here!
MangaHelpers > Manga > Browse > Ocha Nigosu
Home
Chapters
Translations
RSS 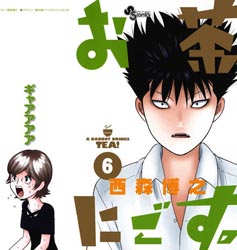 During middle school, Masaya Funabashi earned himself the nickname of "Devil Maa-kun" for being the strongest and scariest delinquent around. However, he's tired of getting into fights all the time and wants to change himself in order to have a peaceful life. But with his frightening appearance and having lots of enemies, it won't be easy. Fortunately for him, he meets Naomi Anesaki on his first day of high school, and she is exactly how he'd like to be: kind, mature, calm, and caring. With his only friend Wataru Yamada, he joins the Tea Ceremony Club that she is the president of in the hopes that he too will be able to learn the peaceful ways of the tea ceremony. He's still got a long way to go though and Kaho Asakawa, another girl who joins the club, thinks he'll never change. Will he be able to? [WinningDays]

I love this manga because it remind's me of Tenshi na Konamaiki whose autor is also Nishimori Hiroyuki. The manga is a light one whose going to make you laught and not get bored easily. Permalink " "
Review by Cococrash11

Its really good why hasn't it been updated? Permalink " "