Like us on Facebook, follow us on Twitter! Check out our new tumblr page. :)
Manga News: Toriko has come to an end; but be sure to swing by and share your favourite moments from the series!
Manhwa & Manhua News: Check out the new Manhwa and Manhua shout-out (March 2016).
Event News: One Piece Awardshas concluded. Check the results Here!
MangaHelpers > Manga > Browse > Pat-Ken
Home
Chapters
Translations
Thread
RSS 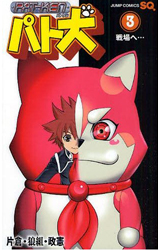 This manga is about a boy named Hayabusa, who dreams of becoming a hero in the name of justice. Which is why he took up a part-time job acting as a costumed hero for a children's stage show. But, when the real villains, the Darkside Arms (DA), attack, the real heroes of the city, the Armored Guardians (AG) are called in. Will Hayabusa be allowed to join the Armored Guardiands and attain his dream of becoming a real hero? Many themes in the manga are borrowed from television sentai series, so fans of Power Rangers might enjoy this!