Like us on Facebook, follow us on Twitter! Check out our new tumblr page. :)
Manga News: Toriko has come to an end; but be sure to swing by and share your favourite moments from the series!
Manhwa & Manhua News: Check out the new Manhwa and Manhua shout-out (March 2016).
Event News: One Piece Awardshas concluded. Check the results Here!
MangaHelpers > Manga > Browse > Uchuu Kyoudai
Home
Chapters
Translations
Thread
RSS 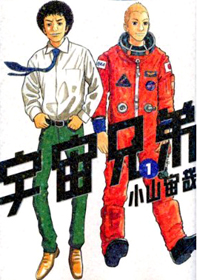 One night in 2006, when they were young, the two brothers Mutta (born 1993) and Hibito (born 1996) saw what appeared to be a UFO heading for the moon. They decided that night to both become astronauts and travel out into space.

In 2025, Hibito has become an astronaut, and he's going to go to the moon. Mutta ended up following a more traditional career path with an auto development company. However, Mutta just ruined his career through a violent altercation with his boss. Now, not only has he lost his job, he appears to be blacklisted in the entire industry. Maybe this is a rare opportunity for Mutta to once again chase his childhood dream and become an astronaut like his little brother! [tethysdust]