Like us on Facebook, follow us on Twitter! Check out our new tumblr page. :)
Manga News: Toriko has come to an end; but be sure to swing by and share your favourite moments from the series!
Manhwa & Manhua News: Check out the new Manhwa and Manhua shout-out (March 2016).
Event News: One Piece Awardshas concluded. Check the results Here!
MangaHelpers > Manga > Browse > Muramasa
Home
Chapters
Translations
RSS 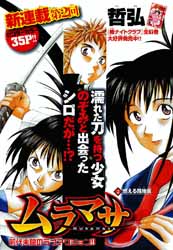 Shiro Masakatsu is a boy people can't stand to be touched, whether they are male or female. One day, he sees a girl with a weird katana finishing a fight with someone, so naturally, he runs away. He later meets the same girl at school, and another katana-wielder picks a fight with her. But it turns out that these katanas have abilities, called Youtou, making them cursed katanas; but to use the Youtou, a certain condition has to be met...

I'm liking this series personally, i think its going places (of course i cant translate wat they say but i still get good vibes from it and wouldnt mind reading more of it) Permalink " "
Review by aretobe

where are the raws!? i can only find translations on this site :( Permalink " "