Like us on Facebook, follow us on Twitter! Check out our new tumblr page. :)
Manga News: Toriko has come to an end; but be sure to swing by and share your favourite moments from the series!
Manhwa & Manhua News: Check out the new Manhwa and Manhua shout-out (March 2016).
Event News: One Piece Awardshas concluded. Check the results Here!
MangaHelpers > Manga > Browse > Ultra Heaven
Home
Chapters
Translations
Thread
RSS 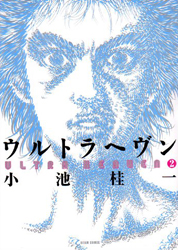 The story is set in a dystopian alternative universe where any kind of substances able to alter the state of mind is legalized and available to be consumed at home or in designated places called Pomp Bar.
These products, once considered very dangerous, are now advertised on TV and the bartender choose those ones more suited to their customers or serve them his special cocktails.

When the Pompies movement obtained the liberalization of the drugs it seemed a historical meaningful change destined to improve the world, a dream realized in a manner to radically affecting the way of life of humanity.But several years after the situation isn't so better, or perhaps the humanity is just adapted to the new situation.

In a world where all feeling are artificials and where everyone is a potential drug addicted, nothing is really changed: the excess is near at hand and very few substances are considered dangerous and put under a strict control by a hygiene office which has full power on the drugs addicted who are in extreme condition.

The main character is Kabu, a little peddler and heavy addicted. Used to any kind of hallucinogenic trip, he is able to feel
the happiness through the ecstasy of the drug, while on the same time hypocritically hating who gave born to that society which has forced him to the excess.
After an overdose caused by mixing two incompatible drugs, he spends his days looking for stimulants until the encounter with an enigmatic man who offers him a new kind of illegal substance:Ultraheaven
From that moment his incredible journey begins, where dream and reality are fused in an undivided world, causing him hysterical or joyful reactions and unrestrained pains.

But what really is Ultraheaven and who's really behind it? And who is the guru who is promoting the meditation as a powerful way to influence the whole universe surrounding us exploiting the quantum theory?
With the help of a special amplifier helmet Kabu starts a trip into the deep and hidden layers of his conscience, diving into a nightmare he would never discover...