Like us on Facebook, follow us on Twitter! Check out our new tumblr page. :)
Manga News: Toriko has come to an end; but be sure to swing by and share your favourite moments from the series!
Manhwa & Manhua News: Check out the new Manhwa and Manhua shout-out (March 2016).
Event News: One Piece Awardshas concluded. Check the results Here!
MangaHelpers > Manga > Browse > Vampire Wing
Home
Chapters
Translations
RSS 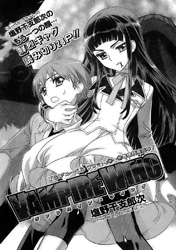 In the not so distant future, Earth is invaded by aliens. The United Nations formed a draft and all humans on Earth are eligable to become soldiers. Kurando Nieno is a rather scrawny high school student, scoring the lowest scores possible on the preliminary draft physical. During an air raid from the aforementioned aliens a rather irritable black haired girl crash lands in front of Nieno and attempts to drink his blood. The United Nations air force and Eliza the vampire have selected Nieno as Eliza's delicious new food source!

This manga is very good why doesn't the author continued it? Permalink " "