Like us on Facebook, follow us on Twitter! Check out our new tumblr page. :)
Manga News: Toriko has come to an end; but be sure to swing by and share your favourite moments from the series!
Manhwa & Manhua News: Check out the new Manhwa and Manhua shout-out (March 2016).
Event News: One Piece Awardshas concluded. Check the results Here!
MangaHelpers > Manga > Browse > Ashita no Joe
Home
Chapters
Translations
Thread
RSS 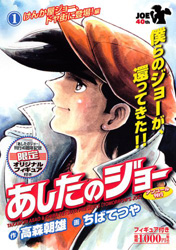 Joe Yabuki is a young man living in the slums of Tokyo. But, one day he meets Danpei Tange, a former boxer, who discovers his potential in boxing and tries to make him into a champion. Due to petty crimes, Joe is sent to a juvenile prison. There Joe mets Toru Rikiishi, a promising boxer, who knocked him out with one blow when he attempted to escape prison. Slowly but surely, Joe realizes his own potential. Joe begins his boxing life, step by step, with only one goal in mind... To Defeat Toru Rikiishi!!