Like us on Facebook, follow us on Twitter! Check out our new tumblr page. :)
Manga News: Toriko has come to an end; but be sure to swing by and share your favourite moments from the series!
Manhwa & Manhua News: Check out the new Manhwa and Manhua shout-out (March 2016).
Event News: One Piece Awardshas concluded. Check the results Here!
MangaHelpers > Manga > Browse > B'TX
Home
Chapters
Translations
RSS 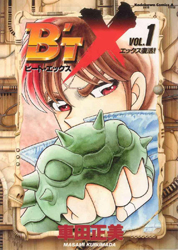 Teppei Takamiya is the caretaker of a farm located in Kamui Island, north of Japan. His older brother, Kotarō Takamiya, leaves to study robotics in Germany and becomes one of the most brilliant scientists in the world.

Five years later, the two brothers reunite at a robotics convention in Mechatopia, China, where Kotarō is to announce his latest breakthrough in artificial intelligence. The convention goes awry when Kotarō is captured by the malevolent Machine Empire and taken to "The Area", a mecha base hidden within the sandstorms of the Gobi Desert.