Like us on Facebook, follow us on Twitter! Check out our new tumblr page. :)
Manga News: Toriko has come to an end; but be sure to swing by and share your favourite moments from the series!
Manhwa & Manhua News: Check out the new Manhwa and Manhua shout-out (March 2016).
Event News: One Piece Awardshas concluded. Check the results Here!
MangaHelpers > Manga > Browse > Baki The Grappler
Home
Chapters
Translations
Thread
RSS 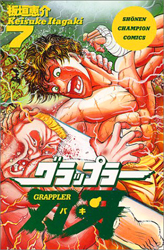 Baki Hanma is a generally happy student with a rather odd hobby; he likes fighting. Specifically, he likes fighting in a secret martial arts tournament that gathers the greatest fighters of the world and pits them against each other in really nasty combat. New Grappler Baki takes off where the original series leaves off. As the new Tournament champion, he's generally taken it easy until he recieves the news of five deadly, murderous, martial artist who have escaped their prisons and are now headed to Japan. Baki and his friends must deal with them before they are killed themselves. New Grappler Baki introduces new characters, new techniques, and begins to resolve the conflict between Baki and his father.

Baki the Grappler or Grappler Baki (グラップラー刃牙) is a manga and anime series by Keisuke Itagaki. It was originally serialized in the Weekly Shōnen Champion from 1991 to 1999, lasting 42 collected volumes. It was followed by two sequel series, New Grappler Baki (バキ Baki) (serialized from 1999 to 2005) and Baki: Son of Ogre (範馬刃牙 Hanma Baki) (which began in 2005 and currently in serialization).