Like us on Facebook, follow us on Twitter! Check out our new tumblr page. :)
Manga News: Toriko has come to an end; but be sure to swing by and share your favourite moments from the series!
Manhwa & Manhua News: Check out the new Manhwa and Manhua shout-out (March 2016).
Event News: One Piece Awardshas concluded. Check the results Here!
MangaHelpers > Manga > Browse > Beet the Vandel Buster
Home
Chapters
Translations
Thread
RSS 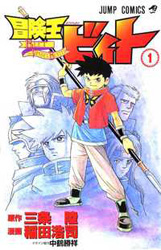 It's the Century of Darkness where monsters known as Vandels rule the world, and the Vandel Busters are the only ones who can fight them. When a group of Busters are killed in battle, they pass on their magic Saiga weapons to Beet, making him the strongest Buster ever. But Beet won't just fight the Vandels--he wants to destroy them and finally end the Century of Darkness.