Like us on Facebook, follow us on Twitter! Check out our new tumblr page. :)
Manga News: Toriko has come to an end; but be sure to swing by and share your favourite moments from the series!
Manhwa & Manhua News: Check out the new Manhwa and Manhua shout-out (March 2016).
Event News: One Piece Awardshas concluded. Check the results Here!
MangaHelpers > Manga > Browse > Buzzer Beater
Home
Chapters
Translations
Thread
RSS 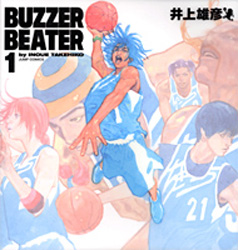 The year is 2XXX AD, and basketball has become the most popular sport in the universe. However, the Intergalactic League -- the pinnacle of professional basketball -- is completely dominated by extraterrestrials. The being widely renowned as the best of basketball is Gyuma, despite the fact he is merely 19-years-old. Into this arena steps Yoshimune, an old man who believes that it`s humans who should be number one in basketball. His plan is to collect the best team of pure humans there is, and attempt to win the Intergalactic League. With this aim in mind, one of Yoshimune`s scouts -- Cha-che -- approach a 14-year-old prodigy named Hideyoshi, and offers him the chance to play in the Intergalactic league. His absolute self-confidence is what Yoshimune wants to drive his team to the top; right to Gyuma!