Like us on Facebook, follow us on Twitter! Check out our new tumblr page. :)
Manga News: Toriko has come to an end; but be sure to swing by and share your favourite moments from the series!
Manhwa & Manhua News: Check out the new Manhwa and Manhua shout-out (March 2016).
Event News: One Piece Awardshas concluded. Check the results Here!
MangaHelpers > Manga > Browse > Crows Gaiden - Linda Linda -
Home
Chapters
Translations
RSS 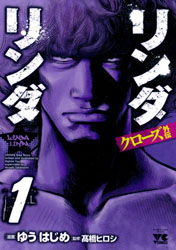 This is a story about Hayashida Megumi (known as Lindaman), from the manga Crows, set in his middle school years. Hayashida is an incredibly strong, ridiculously large and very taciturn 'yankee' type middle schooler. Yoshidome Keiichi, a much smaller, weaker, and very talkative classmate starts to hang out with him, and slowly they become friends. All the while, large groups of people keep coming to attack 'Lindaman', due to grudges they have against him or even simply because of his reputation as being very strong. [tethysdust]