Like us on Facebook, follow us on Twitter! Check out our new tumblr page. :)
Manga News: Toriko has come to an end; but be sure to swing by and share your favourite moments from the series!
Manhwa & Manhua News: Check out the new Manhwa and Manhua shout-out (March 2016).
Event News: One Piece Awardshas concluded. Check the results Here!
MangaHelpers > Manga > Browse > Devilman
Home
Chapters
Translations
RSS 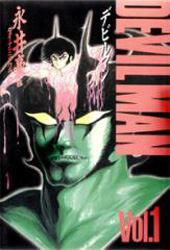 Akira Fudo, who has become the Devilman, the only being who can fight demons; a being possessing the powers of a demon and a soul of a man. A long time ago, the Earth was ruled by demons. The demons constantly fought each other for survival, but soon found themselves fighting a new race of beings: The first humans. The demons then became imprisoned in ice after a great cataclysm. They would remain there until the ice melted, after which it was said Satan would rise and lead them in Armageddon. That time has come in Go Nagai's Devilman.