Like us on Facebook, follow us on Twitter! Check out our new tumblr page. :)
Manga News: Toriko has come to an end; but be sure to swing by and share your favourite moments from the series!
Manhwa & Manhua News: Check out the new Manhwa and Manhua shout-out (March 2016).
Event News: One Piece Awardshas concluded. Check the results Here!
MangaHelpers > Manga > Browse > Dois Sol
Home
Chapters
Translations
Thread
RSS 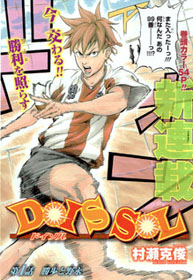 Nonaga Hiromasa is an up and coming soccer coach who has made a name for himself for bringing multiple teams from literally nothing to the top in the country. What’s even more impressive is that he just entered high school! He was recruited into his current high school as the new soccer coach, and his observation skills and ability to predict the opponents’ movement make his sole presence enough to win games.

The fact that Hiromasa is going to be coaching at the high school has many top soccer players flocking to this school, but none stand out more to him than Sakamichi Kappo. Not only can Kappo score a goal from half field with his powerful kick, but his ball control is second to none. Initially, Kappo didn’t want to play on a team because he thought no one understood “his soccer style,” but when Hiromasa was able to understand it, Kappo decideds to play for the team. Will the brilliant coach and the talented player be able to take the high school soccer world by storm? [vyc]