Like us on Facebook, follow us on Twitter! Check out our new tumblr page. :)
Manga News: Toriko has come to an end; but be sure to swing by and share your favourite moments from the series!
Manhwa & Manhua News: Check out the new Manhwa and Manhua shout-out (March 2016).
Event News: One Piece Awardshas concluded. Check the results Here!
MangaHelpers > Manga > Browse > Fight no Akatsuki
Home
Chapters
Translations
Thread
RSS 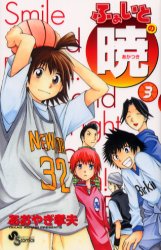 Akatsuki and his good friend Kiyoharu (called Kiyo-chan by Akatsuki) have been playing 'two player' basketball for quite sometime. Unfortunately, things started to change after they have joined in a very strong basketball team in their new school. Both of them were forced to separate into two groups: Kiyoharu was in the 'B' group and poor Akatsuki was put under 'F' group, which is known as the 'Failure' group. However, Akatsuki was not discouraged at all. He continues to train hard and always has a smile on his face. Will Akatsuki succeeded in his promise to Kiyoharu to become an official player? And what is blocking the path towards reaching his goal?