Like us on Facebook, follow us on Twitter! Check out our new tumblr page. :)
Manga News: Toriko has come to an end; but be sure to swing by and share your favourite moments from the series!
Manhwa & Manhua News: Check out the new Manhwa and Manhua shout-out (March 2016).
Event News: One Piece Awardshas concluded. Check the results Here!
MangaHelpers > Manga > Browse > Strings Dolls
Home
Chapters
Translations
RSS 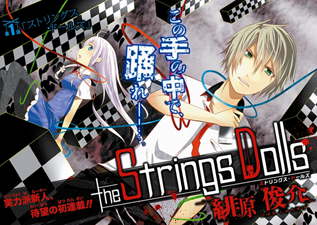 One day, Shiro and his little sister, Koyori, who has been permanently crippled after an accident, download a peculiar game called "Strings Dolls." Whenever you have someone in your camera screen, the game allows you to move them around like a puppet. Shiro and Koyori are filled with joyl to realize that this magical game can, at least temporarily, restore her ability to walk! Other people, however, use it for much less noble purposes. Among the others who have downloaded the game is a mysterious player called Miyabi, who appears to be using the game to kill off his fellow players. Will Shiro be able to track down who is behind this game, and find the murderous Miyabi before it's too late? [tethysdust]