Like us on Facebook, follow us on Twitter! Check out our new tumblr page. :)
Manga News: Toriko has come to an end; but be sure to swing by and share your favourite moments from the series!
Manhwa & Manhua News: Check out the new Manhwa and Manhua shout-out (March 2016).
Event News: One Piece Awardshas concluded. Check the results Here!
MangaHelpers > Manga > Browse > Suzumiya Haruhi no Yuuutsu
Home
Chapters
Translations
Thread
RSS 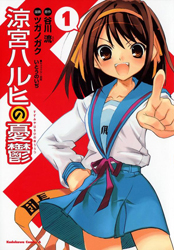 Kyon is your ordinary high school freshman who has long given up on his childhood dreams of encountering the fantastic and supernatural…or so he thought. From the very first day of school, his classmate-the beautiful but eccentric Haruhi Suzumiya-makes it very clear that her only desire is to meet aliens, time travelers, and psychics! A chance conversation between the two inspires Haruhi to form the SOS Brigade, a school club created for the sole purpose of getting these supernatural beings together. The initial members consist of the mute bookworm Yuki Nagato, the timid but voluptuous Mikuru Asahina, and the polite and ever-smiling Itsuki Koizumi. By the end of this first volume, Kyon quickly finds out that these seemingly “helpless victims” of Haruhi’s are actually members of secret organizations-both futuristic and alien-keeping watch over Haruhi as she is the pinnacle of some major calamity on the horizon…

Note: There are two mangas named "Suzumiya Haruhi no Yuuutsu" which were both published in Shounen Ace. The other one was illustrated by Mizuno Makoto from May to December 2004 and was cancelled.