Like us on Facebook, follow us on Twitter! Check out our new tumblr page. :)
Manga News: Toriko has come to an end; but be sure to swing by and share your favourite moments from the series!
Manhwa & Manhua News: Check out the new Manhwa and Manhua shout-out (March 2016).
Event News: One Piece Awardshas concluded. Check the results Here!
MangaHelpers > Manga > Browse > Zombie-Loan
Home
Chapters
Translations
Thread
RSS 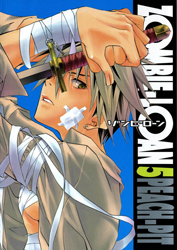 When a human is marked to die, a faint gray line that is invisible to most appears around their neck. As time passes, that ring becomes darker and darker, until it is eventually black, and that person dies. Kita Michiru has an unusual gift, she posses "Shinigami eyes," which allow her to see these rings. When Michiru notices that two of the boys in her Class, Akatsuki Chika and Tachibana Shito not only have rings, but that they're jet black, they reveal to her that the were supposed to die in a tragic accident six months ago. With the help of the Zombie Loan loan office, they were given a second chance at life, should they be able to pay for their debt by doing the work of Shinigami and killing malicious zombies. They petition Michiru to assist them in their efforts, and she finds her everyday life changing dramatically.