Like us on Facebook, follow us on Twitter! Check out our new tumblr page. :)
Manga News: Toriko has come to an end; but be sure to swing by and share your favourite moments from the series!
Manhwa & Manhua News: Check out the new Manhwa and Manhua shout-out (March 2016).
Event News: One Piece Awardshas concluded. Check the results Here!
MangaHelpers > Manga > Browse > Beshari Gurashi
Home
Chapters
Translations
Thread
RSS 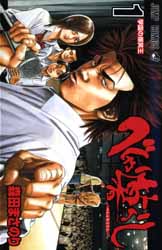 Keisuke may look it, but he isn't the average high school guy. He aspires to become an 'owarai' artiste. Keisuke is constantly thinking of ways to make people laugh and gets really upset when the crowd doesn't respond. Even when playing soccer (he's the goal-keeper), he actually comes up with strategies of the funniest way to receive the ball!! (He got hit in the face with the ball but the crowd loved it.)

Note: 'owarai' is basically stand-up comedy, but the characteristics of the jokes usually being told in the kansai-dialect or kansai ben, and it usually requires a duo; a 'bo-ke' and a 'tsukomi'. Think the three stooges: Moe is usually the 'tsukomi', and the other two, usually making the silly mistakes, are the 'bo-ke'.

The artist/writer of "besharigurashi' (Masanori Morita) is also the one who made "Rookies". Apparently Masanori-sensei actually enrolled into a reputable school to learn the arts of 'owarai', just for this manga! Like 'Rookies', the names of characters in the manga are of real-life artistes and celebrities, whereas the celebrities that appear in the manga have fictional names (although they are drawn to look like celebrities in real life).

All in all, this manga is pretty hilarious, but it requires quite some familiarity with Japanese culture (or else you won't understand the jokes), and the Japanese language. Recommended for those who are curious about Japanese culture and way of life (There are some exaggerations but not too bad; it's more slice-of-life than shounen). [6gatsu]