Like us on Facebook, follow us on Twitter! Check out our new tumblr page. :)
Manga News: Toriko has come to an end; but be sure to swing by and share your favourite moments from the series!
Manhwa & Manhua News: Check out the new Manhwa and Manhua shout-out (March 2016).
Event News: One Piece Awardshas concluded. Check the results Here!
MangaHelpers > Manga > Browse > Blue (SAKISAKA Io)
Home
Chapters
Translations
RSS 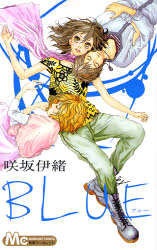 Anna has worked hard to attend the same high school as her hopeless crush, who is her cousin Reiji. Now that they're in the same class, she doesn't understand why Reiji keeps fluctuating between trying to protect her and treating her like an annoyance. Anna's new closest friend, Rumi, seems to be the only girl at school not obsessed with Reiji. However, Reiji doesn't seem to be able to keep his eyes off of Rumi. Does he have a crush on her, or is there some other reason for his attention? [tethysdust]