Like us on Facebook, follow us on Twitter! Check out our new tumblr page. :)
Manga News: Toriko has come to an end; but be sure to swing by and share your favourite moments from the series!
Manhwa & Manhua News: Check out the new Manhwa and Manhua shout-out (March 2016).
Event News: One Piece Awardshas concluded. Check the results Here!
MangaHelpers > Manga > Browse > Dante's Divine Comedy
Home
Chapters
Translations
RSS 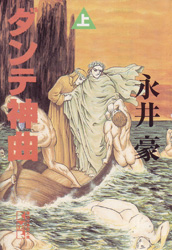 The Divine Comedy (La Divinia Comedia) is a poem written by Dante Alighieri in the 14th century. At face value, it details his travels through Inferno (Hell), Purgatorio (Purgatory), and Paradiso (Paradise). However, a deeper interpretation represents a soul's journey towards God based off of Medieval Catholicism.

Like the poem itself, the manga adaptation finds Dante, a poet, lost in a dark forest. Unable to find his way out and to salvation, he comes across Virgil, who offers to guide him through the underworld and to salvation.

Inferno (Hell) - Dante and Virgil travel through the three upper levels of Hell that represent the three types of sin: the self-indulgent , the violent, and the malicious. These levels are split into 9 'circles.' The first five represent self-indulgence (limbo, lust, gluttony, etc); circles 6 and 7 for the violent sins (heresy and violence); and circles 8 and 9 for the malicious sins (fraud and treachery).

Purgatorio (Purgatory) - After making their way through Inferno (Hell), Dante and Virgil find themselves on the mountain of Purgatory. Consisting of ten levels, purgatory represents the life of a Christian. The first two represent Ante-Purgatory (the excommunicate and the late repentant); the seven terraces (seven deadly sins); and the last being the Earthly Paradise (the Garden of Eden or innocence).

Paradiso (Paradise) - Because he lived before Christ's time, Virgil can no longer guide Dante the rest of the way. In his absence, Beatrice, the love of Dante's life guides him through the nine spheres of Heaven and The Empyrean. The nine spheres are represented by the celestial bodies (Moon, Mercury, the Sun, etc) and depict the nine levels of angelic hierarchy. The last level, The Empyrean, is God's domain and transcends physical existence. [vintagemistakes]