Like us on Facebook, follow us on Twitter! Check out our new tumblr page. :)
Manga News: Toriko has come to an end; but be sure to swing by and share your favourite moments from the series!
Manhwa & Manhua News: Check out the new Manhwa and Manhua shout-out (March 2016).
Event News: One Piece Awardshas concluded. Check the results Here!
MangaHelpers > Manga > Browse > The Grim Reaper of the East
Home
Chapters
Translations
RSS

The Grim Reaper of the East 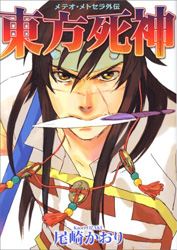 Summary:
Zol, a bounty hunter who goes by the nickname of “Grim Reaper”, spends his days chasing criminals under the orders of Fusa, his master and the city’s respected mayor. One day, Zol takes up responsibility for burying a man who died in a hit-and-run on the streets.

But much to his surprise, the supposedly dead man pops out of the coffin!! Is this the world’s most wanted man, Methuselah?! This is the adventure-packed tale of the fateful encounter between Zol, the “Grim Reaper” and grandfather to Meteor Methuselah’s super heroine Machika, and the Methuselah named Rain!!