Like us on Facebook, follow us on Twitter! Check out our new tumblr page. :)
Manga News: Toriko has come to an end; but be sure to swing by and share your favourite moments from the series!
Manhwa & Manhua News: Check out the new Manhwa and Manhua shout-out (March 2016).
Event News: One Piece Awardshas concluded. Check the results Here!
MangaHelpers > Manga > Browse > Vampire Hunter D
Home
Chapters
Translations
Thread
RSS 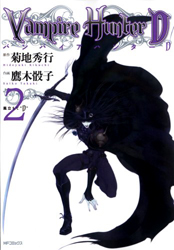 D, a sort of lone wolf-like knight-errant, wanders through a far-future post-nuclear Earth that combines elements of pulp genres: western, science fiction, horror, high fantasy, H. P. Lovecraftian mythos, folklore and occult science. The planet, once terrified by the elegant but cruel Nobles (vampires), ancient demons, mutants and their technological creations, is now slowly returning to a semblance of order and human control — thanks in part to the decadence that brought about the downfall of the vampire race, to the continued stubbornness of frontier dwellers and, to the rise of a caste of independent hunters-for-hire who eliminate supernatural threats.

The year is approximately 12,090 AD. Some time in 1999, a nuclear war occurred. The Nobility were vampires that planned for a possible nuclear war and sequestered all that was needed to rebuild civilization in their shelters. They use their science combined with magic to restore the world in their image. Nearly all magical creatures are engineered, with a very small number being demons who survived the holocaust. Despite their technology being great enough to create a blood substitute as food, they still prefer to feed on humans. As such, they create a civilization where vampires and humans coexist, eventually developing the planet into parklands and cities. The society eventually stagnates when vampire technology perfects scientific prophecy, which determines they are at their zenith of existence and thus are doomed to fall, overthrown by humans. The human race was also transformed at this time, with fear for the vampires being woven into the genetic level, and the inability to remember vampire weaknesses such as garlic and crucifixes.