Like us on Facebook, follow us on Twitter! Check out our new tumblr page. :)
Manga News: Toriko has come to an end; but be sure to swing by and share your favourite moments from the series!
Manhwa & Manhua News: Check out the new Manhwa and Manhua shout-out (March 2016).
Event News: One Piece Awardshas concluded. Check the results Here!
MangaHelpers > Manga > Browse > War Front on Spike Hills
Home
Chapters
Translations
RSS 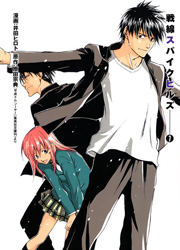 Nomura Nobuo was a normal highschooler, until his almost-supernatural "gift" for pickpocketing convinced him of his separation from the masses. When his ability is unmasked by high school mathematician Kaburagi Jirou, it marks the beginning of a war -- a war on the conventions of society itself. The front: Spike Hills.

The loot at the end of the long, dark warpath they embark upon is free admissions to a top university, but, as Nobuo and Jirou are about to find out, sometimes "free" things have a hidden price that you just can't afford to pay ...