Like us on Facebook, follow us on Twitter! Check out our new tumblr page. :)
Manga News: Toriko has come to an end; but be sure to swing by and share your favourite moments from the series!
Manhwa & Manhua News: Check out the new Manhwa and Manhua shout-out (March 2016).
Event News: One Piece Awardshas concluded. Check the results Here!
MangaHelpers > Manga > Browse > Burning Hell
Home
Chapters
Translations
Thread
RSS 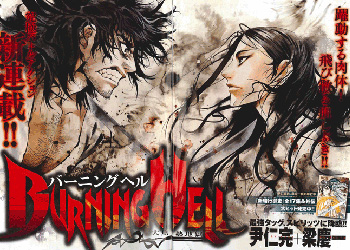 Set in Japan and Korea during the Edo period, a time of great upheaval between the two cultural groups.

There is an island where both Japan and Korea unload their most dangerous and violent criminals. It's said that the island has become hell on earth, and anyone left alive there have become demons. The latest drop-off at the island is a very strong, very violent murderer. Will he be able to overcome whatever he might find on this hell island? [tethysdust]

i find this manga to be really good, cant wait to see more chapters Permalink " "
Review by maxikki

i like this than defense dev, this is more like of their late release of Shin Angyo Onshi. Permalink " "
Review by Reminiscence

Yeah, I can't wait until more chapters are released. Defense devil is too... slow for me. I don't like the whole "detective" type mangas - conan and the like. Permalink " "
Review by Millia

well its obvious since this is much more mature seinen and really dark. i like the combination of korean and japanese. Permalink " "
Review by Hiyoko