Like us on Facebook, follow us on Twitter! Check out our new tumblr page. :)
Manga News: Toriko has come to an end; but be sure to swing by and share your favourite moments from the series!
Manhwa & Manhua News: Check out the new Manhwa and Manhua shout-out (March 2016).
Event News: One Piece Awardshas concluded. Check the results Here!
MangaHelpers > News > Manga Reviews > Chapter Review: Edens Zero (18)
Homepage
Details
Archives 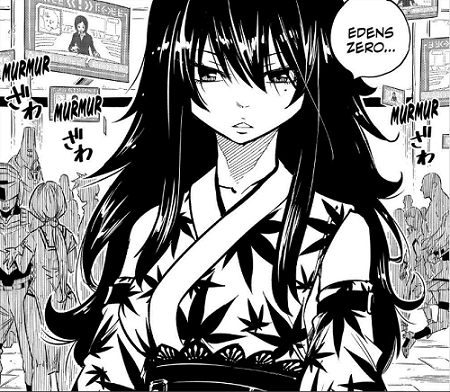 This week begins with Shiki squaring up against the Mysteriously Ineffective Kidnapper and with Lavillia watching in the background with a giant pervert smile on her face. Pino recommends caution until he figures out what this cyborg can do as Shiki jumps in and the fight is on. Shiki has the upper hand at first with his gravity powers but his opponent breaks out the rocket arms again and shows off some wind control abilities. Then breaks out his big guns reveals his true powers with a "Skymech Ninjutsu" attack that causes a massive cross shaped cut on the street where they were fighting. This launches a lot of innocent drivers and their cars into the air but Shiki manages to rescue them all by centering the gravity of all the cars and stopping one from scooting off a nearby ledge.

Shiki then gives the Ninja Cyborg a firm talking to about careless collateral damage. The Ninja Cyborg doesn't care however during the pause he receives a call that tells him to retreat. As he turns to leave he reveals his name is Jinn and that if Shiki wishing to challenge him to come to Guilst. And leaves off with the line "We will settle this at a future date. Someday..when the wind howls.." (What a massive chunni douchebag...) Leaving Shiki there as irritated and confused as any person would be after that exchange. Lavillia then comes in with a flying hug and a thank you for both saving her and giving her great video material then follows that up by running off. Leaving Shiki and Pino standing here. Until Shiki can't hold it in any longer and yells that Ninjas are awesome.

They return to the guild to wait for Rebecca until Happy walks in looking beat up. Rebecca and the Guildmaster have been kidnapped! Just as Shiki learns this a news announcement appears on the veiwscreen in the guild declaring that a series of kidnappings just happened across the city and that all of the victims are B-cubers. Shiki immediately makes the connection to the ninja he fought, the kidnappings, and the Planet Guilst. And this time is well and truly pissed off, embedding the table he was resting his hand on into the floor with rampaging gravity power. He tells Pino they're heading to Guilst and that it's time to return to Edens Zero. As he runs off, a girl in a kimono watches him and seems to recognize the name of that ship.

Meanwhile Rebecca wakes up to find herself tied up in a strange ship and looks around to see that she's surrounding by prominent B-tubers. Before she can think much about it however a three man goon squad shows up, Ninja-douche Jinn among them, and announces that they all belong to Sister now. 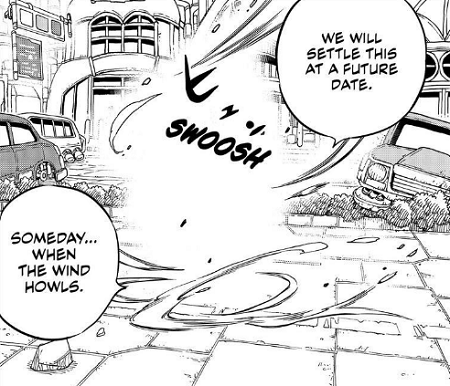 So we see this arc taking shape. A battle against slavers that puts our heroes and Edens Zero right in the middle. There are a lot of characters in play here. We've got Jinn, who I immediately hate, forming an immediate rivalry with Shiki; not that Shiki noticed or cared. We've got this new kimono wearing girl who looks like she could be a ninja herself. Then we've a got a whole ship full of B-Tuber characters and a mysterious guild master that is missing too. This whole arc is a just a massive repository of potential Edens Zero crew members. That should be fun.

In terms of opposition we've got two factions. Sister's bizarre group of slavers and Pervy Kermit's forces. How hostile this is likely going to be will likely be decided by whether or not the Sister these slavers are answering too is the same one Shiki is looking for. I tend to think it isn't. Seems to me like the guild master is a better bet to be THE Sister, with these clowns using her name, but I could be wrong. Either way I'm pretty sure Shiki is going to get some worthy opponents for the first time. And hopefully get a chance for Rebecca to do some awesome stuff with that new ether gear she may have.

Some pretty great fight artwork this week. Mashima's pretty good at drawing his fights in a way that making the flow panel to panel interesting. This chapter was a pretty classic example of that but with added bonus of doing a kind of urban environment that I don't think he's ever worked with before. The only flaw with it was that as it flowed onto the highway it didn't fully maintain spacial awareness. For example it culminated in Shiki stopping a car from going off a ledge with a lengthy drop but before that panel it was never suggest they were above ground level. Lots of new character designs this week too, all of them looked interesting a fun.

In terms of pacing and flow, it's jumping right back to top speed. While it does seem like a mildly questionable move to skip the scene where Rebecca was kidnapped, I'm assuming that was done to hide something; and that something probably has to do with the guild master's true identity. Regardless, we are fully in this arc now and it's full speed ahead.

A good fight sequence. Strong and fast paced buildup for what seems like the first big battle arc. A lot to like about this chapter.

To discuss more about the manga, please visit our Edens Zero Section!