Like us on Facebook, follow us on Twitter! Check out our new tumblr page. :)
Manga News: Toriko has come to an end; but be sure to swing by and share your favourite moments from the series!
Manhwa & Manhua News: Check out the new Manhwa and Manhua shout-out (March 2016).
Event News: One Piece Awardshas concluded. Check the results Here!
MangaHelpers > News > Manga Reviews > Chapter Review: Edens Zero (22)
Homepage
Details
Archives 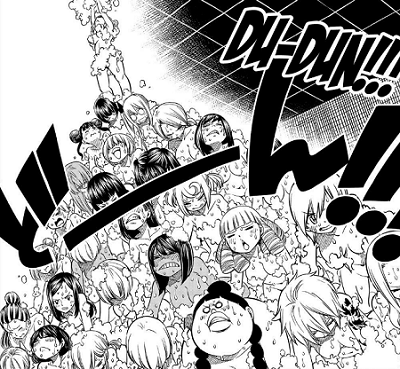 I love this panel because of the teamwork it represents. Why are you looking at me like that?

This week picks up with Homura standing in the wreckage that was once Rogue Out, littered with the beaten unconscious bodies of the forces Sister thought would capture both her and Shiki, remarking that she's a little disappointed that was the best they could do. Meanwhile outside Weisz looks with a healthy amount of fear of the battle maniac Homura.

Meanwhile, the Rogue Out kidnapping crew are arguing with Illegua's people who refuse to pay up because they were a B-Cuber short. Sister's ship arrives and she informs her people that she will handle this and goes to speak to Pervy Kermit directly. Shiki, having hitched a ride on her ship sneaks off to rescue Rebecca, resisting the urge to go down and beat the crap out of a certain ninja. As he does Sister sends Bosco back to base to handle cleanup and he flies off using the power of sumo slaps because.. why the hell not, I guess?

Then the scene switches to the B-Cubers who are all naked in the clothes melting bubble bath. But together they overcome this dangerous situation. They form a plan. Using the bubbles materiel and jewelry melting abilities to melt a glass window near the ceiling and getting to that window by forming a the worlds sexiest pyramid and having Rebecca climb to the top. The plan works. She sneaks around the air vents trying to find clothes or some way for everybody to escape. But as she discovers the pantry. Pervy Kermi discovers her and grabs her with his freaky tongue. But, just as he is about to use some weird tongue power on her, Shiki bursts through he floor with a kick of justice! 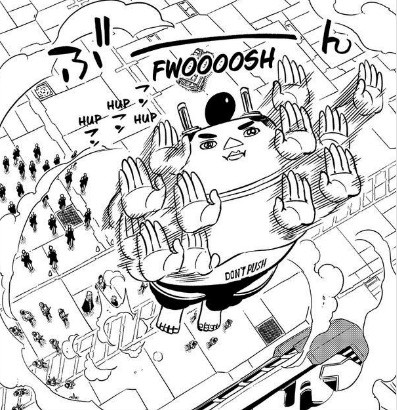 So Homura is pretty awesome. Looks like Sister really underestimated her and Shiki big time. Now we move toward Homura's confrontation with Bosco and Sister's impending confrontation with Shiki. I still think Rebecca will find a chance to beat Pervy Kermit as I feel like that's important to have her character do. She's already established herself as something special among B-Cubers even if she's not the most famous. Beating frogman would put a good exclamation mark on that as she moves on to be a B-Cubing space adventurer.

This is going to leave her and Shiki in a pretty tense situation though. Fighting Pervy Kermit in his own base with Sister heading their way. Which means all kinds of trouble. When you add to that their are 28 more naked girls he's going to need to get out of there. This is definitely going to be a challenge.

Now we get to the real thing this chapter was about. The shameless fan service (my favorite kind). Leave it to Mashima to decide to make an escape scene featuring 29 characters all wearing nothing but soap bubbles. It really is an impressive scene in a lot of ways. A soaped up naked pyramid. That's an ecchi moment for the history books. Stuff of legends.

Art was good. Most of the impressive stuff was in the ecchi scenes this time but it was impressive just the same. I'm sure when Mashima was drawing the sexy naked pyramid at around girl 20 of 29 he must have just hated himself for dreaming up this idea. I've read manga that didn't have 29 characters in the whole series but he did it. I counted them. He made 29 mostly distinct characters for that one gag. I applaud his insanity.

Pacing was typical. Very quick but it was clearly another set up chapter. Moving characters around setting up battles. The ecchi was the mechanism used to disguise that and inject some fun and entertainment; and it worked. So no complaints there.

This was an above average set up chapter. Using some ecchi and entertaining situations to help mask that it's mostly just moving characters around in order to set up what's coming next.

1 members and 0 guests have thanked Kaoz for this news