Like us on Facebook, follow us on Twitter! Check out our new tumblr page. :)
Manga News: Toriko has come to an end; but be sure to swing by and share your favourite moments from the series!
Manhwa & Manhua News: Check out the new Manhwa and Manhua shout-out (March 2016).
Event News: One Piece Awardshas concluded. Check the results Here!
MangaHelpers > News > Manga Reviews > Chapter Review: Dr. Stone 110
Homepage
Details
Archives

This week's chapter of Dr. Stone starts with the Science Team celebrating their successful recovery of the Lab,they do so while driving through the Forest,because now they can finally start with their "Cute-ification"-Process of Kohaku. Something which is news to Suika and Ginro's ears but is quickly explained by Kohaku who is still very eager and excited to enter the Inner Palace to get her hands onto the Petrification Weapon. As Senkuu and Co. fill their comrades in about the current situation we see Prime Minister Ibara inspect the tracks left behind by the wheels of the Lab,seemingly skeptical about wether or not this was actually left behind by an Animal as the soldiers are claiming or if this isn't something beyond their understanding. I gotta give this guy credit,considering they do not have any sort of science on their Island and don't even know Goats or some common vegetables and fruit he is pretty quick to get that this might not be an animal. Perhaps seeing the Perseus flipped his world upside down? Seemingly,yes. Back at Senkuu and Co's Location we see Kohaku and Suika create a few fake tracks to mislead the soldiers in case they start a search for them,once they did so Amaryllis led them into the Sapphire Cave which can only be accessed from the sea and is a Cave eroded away by the waves. Gen likens it to a place in Italy,on the Island of Capri called the "Blue Grotto" which is a famous spot for tourists in the country. Amaryllis assures them that they'll be save in there for the time being.

Spoiler: The Blue Grotto in Italy 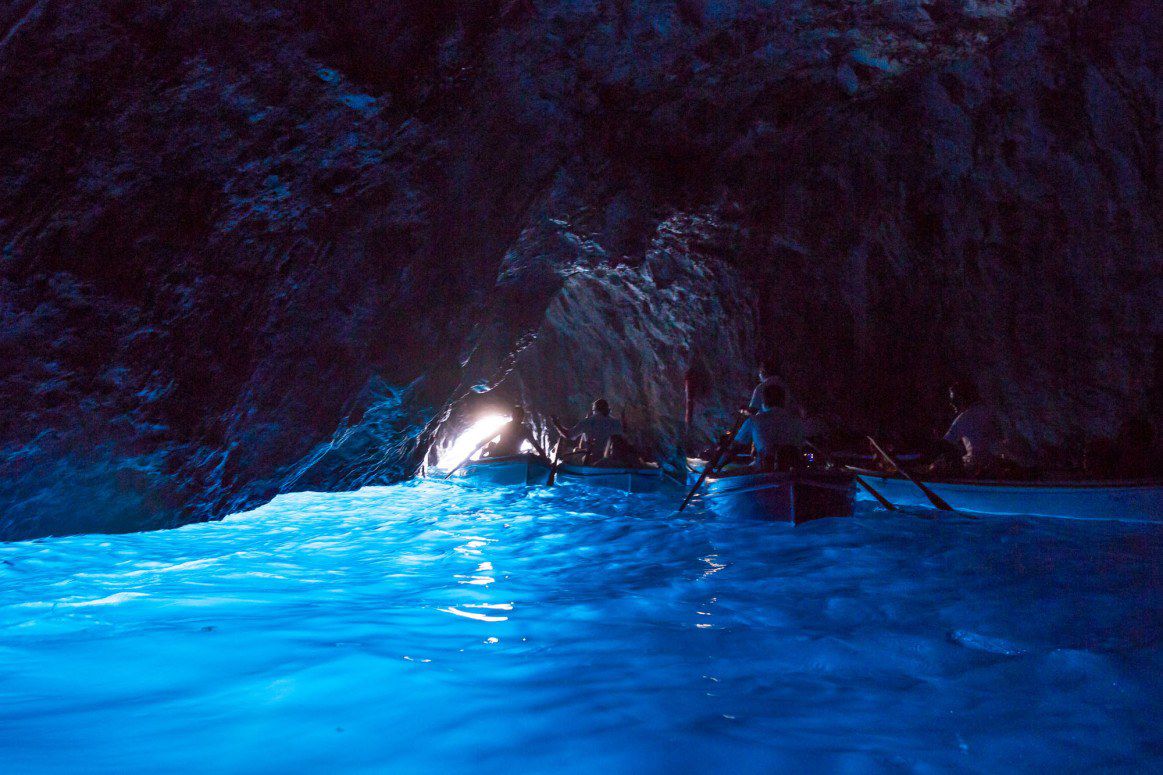 Back to the coast where the Perseus is anchored we see Minister Ibara do what Senkuu and Co. expected as he orders his soldiers to begin their search over the entire Island,every Forest,every Village,every house,every nook and cranny. Back in the Cave,Kohaku wonders if the Inner Harem Selection will still take place with matters as they are which is confirmed by the arriving Amaryllis who was out gathering ingredients for Senkuu. She says that there is no way that Mozu would postpone it,she explains that while he is very strong unlike Minister Ibara he isn't stressing over small matters or the overly cautious type. He's very relaxed,but he only cares about cute girls. Something we saw before when in the Flashback of Amaryllis he would almost droll over her being cute when she was just a little girl. As she finishes they start inspecting the ingredients delivered to them,which are 10 billion percent useful to them and there is plenty for them to use as well. She laments that she was only able to gather a few fruits like Coconuts or pears,but Senkuu thanks her because this is just what they need. With the things they have in the Lab Car these simple fruits can become so much more it excites him to no end, as he says so we are shown a "Roadmap" of Kohaku's way to become a Beauty alongside all the MakeUp,Hygiene products and beauty products she needs which are Shampoo,Lipstick,a Lamé Foundation,Conditioner and Perfume. Let's get to it! This is where it becomes very funny!

Suika is shocked that they are going to create and apply so many things in the short time they have till Noon,prompting Kohaku to say that being Cute sounds like a lot of work,Senkuu remains cool about it as always since he knows what he's doing. He walks up to Kohaku,attempting to take of her hairband because hair styles can make a big impact,but as he removes the hairband he is hit by her wild and untamed hair or as Senkuu calls it: It is ratty,frizzy and sticks up all over the place. Like he's one to talk right? Anyway,the first step will be to create Shampoo by combining Coconut Oil with Sodium Hydroxide and Sulfuric Acid as well as a bit of Salt and Oil and Tada! here we go. Shampoo Aquired! But that isn't enough,as expected,because Kohaku's hair stands up into all directions again even though her hair is washed and shampood making it clean and smooth her hair bristles still remain stiff because they have been upturned by the previous washing which the fats and oils inside the conditioner will "fix". He says it doesn't need more than some fluids from the Lab Car mixed with Lemons,Honey and Coconuts to create it, Conditioner Aquired! as Kohaku brushes her fresh,fluffy,silky and smooth hair. Senkuu breezes through the "Roadmap" now as he quickly creates Perfume,Lamé,Foundation and the Lipstick required which as usually confuses Ginro as he has no idea what any of these things are.

As Kohaku is handed her "tools" she suddenly enters her serious,battle mood and starts applying it to her face in a really rushed,wild and unconventional manner. Now is where i almost lost it,going by Ginro and Senkuu's reaction we are led to think she actually applied it decently and now looks unbelievably cute but just as we look at the top of the next Page we see that they are actually scared because Kohaku applied the make up in a way that makes her look like the Joker from Batman. I broke there,couldn't keep it in anymore i'm sorry. Meanwhile Senkuu and Co. start wondering if this really was a good idea but Amaryllis offers to apply the makeup for her and she succeeds because Kohaku now managed to wow Suika and Soyuz immediatly, with good cause because Kohaku now looks like a completely different person. You wouldn't think she is a skilled fighter at first sight,Amaryllis on the other hand takes some of the Beauty Products created by Senkuu and is now attempting to turn some of the guys into "Innocent Maiden" as they need more candidates for the selection than just Kohaku and herself. First up is Senkuu,who doesn't want to participate and whose voice would reveal him as a guy immediatly. Next up is Gen,who if not for his height would pass as a Cute girl since he can even replicate a girl's voice,after him is Soyuz who...yeah i don't think we need a description here he doesn't pass as a girl no matter what Outfit or MakeUp gets applied. Too much of a brute,fierce warrior guy.

Which leaves Ginro,who has the perfect build and a voice closer to a woman's than a man's. Time goes by to the next Morning and we can see Mozu and his Warriors approach the Village of Amaryllis in order to start their selection, The most Powerful Warrior on the Island is looking forward to the selection as it only happens once a year and it is always a treat to see new cute girls for him. Inside the Lab Car we can see Senkuu and Gen wondering if everything will go well,especially with "Ginny". Senkuu seems certain that their candidates will be chosen and as we take a look at the next and final page we see that Ginro actually looks like a Girl now and could technically compete with Kohaku and Amaryllis,the Mission to take the Petrification Ray for themselves is about to begin and so is the Selection.

This Chapter was hilarious, 9/10 ,i cracked up at almost every page. The MakeUp invention process was nice to see and i like that they remembered Magma and Chrome digging up some of the Materials,since both of them are petrified and yet are still contributing to the Science Team's success. I didn't think they'd actually go and add one of the guys into the Selection Team,and when i saw that it was Ginro i couldn't help but laugh again. Inb4 he gets chosen by the Great Leader as a Partner or something xD,but i'm definitely looking forward to this Selection and who the great Leader actually is. It will be interesting to see who he actually is and what he is like in person,as well as how good Ginro plays his role here alongside Kohaku and Amaryllis. I believe it'll be the latter stealing the Weapon while Ginro ends up distracting Mozu and Kohaku might fight Kirisame again while the Prime Minister continues his search for the intruders? I'm not sure we'll see about it i guess,i'm looking forward to it for sure that's all i know right now. Stay excited for the next Chapter! Till next time everybody!

To discuss and share your thoughts on the manga, you can visit our Dr. Stone section.