Like us on Facebook, follow us on Twitter! Check out our new tumblr page. :)
Manga News: Toriko has come to an end; but be sure to swing by and share your favourite moments from the series!
Manhwa & Manhua News: Check out the new Manhwa and Manhua shout-out (March 2016).
Event News: One Piece Awardshas concluded. Check the results Here!
MangaHelpers > News > Manga News > Naruto event... in Naruto!
Homepage
Details
Archives

+ posted by njt in Manga News on Jun 30, 2010 08:41
The city Naruto is celebrating the success of the manga... Naruto! Starting this July the city Naruto will start selling specially made Naruto 1000 yen gift certificates. 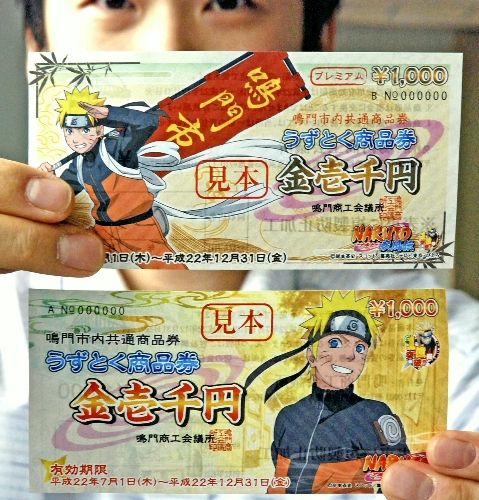 Example of the certificates
To commemorate Naruto selling 100 million volumes they will be printing out 100 million yen worth of them! These certificates can be used at around 250 shops located around the city until the end of the year. The goal is to try and get a lot of new faces into the old city and teach them a little bit about it.

From August 9th, through to the 11th, they will be handing out fans with Naruto characters on them at the Awa Odori festival as well as a special guest appearance by Takeuchi Junko, the voice actress of Naruto. 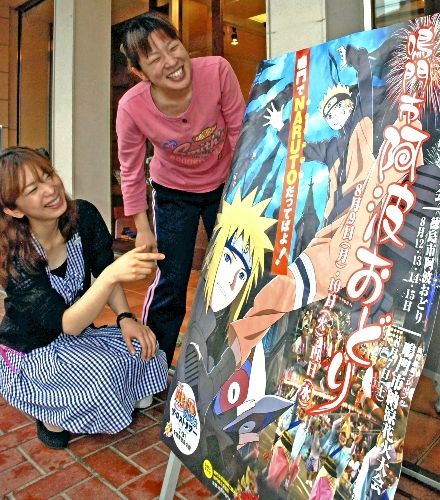 Poster promoting the event
When asked for a comment about the event, Kishimoto-sensei said, "I had always imagined that we'd do something like this with the city Naruto someday but I can't believe it's really happening!" (He actually phrases his Japanese to jokingly add "Naruto" into his statement but it doesn't translate over very well :p)

Is there any town called OnePiece? :D

[Permalink]
I bet there's a town called "Angel Beats" too...

[Permalink]
Naruto event in Naruto? Minato,Kushina,Kyuubi,Itachi and Yami Naruto are in.

[Permalink]
Is there a town named "Hibari"? xD