Like us on Facebook, follow us on Twitter! Check out our new tumblr page. :)
Manga News: Toriko has come to an end; but be sure to swing by and share your favourite moments from the series!
Manhwa & Manhua News: Check out the new Manhwa and Manhua shout-out (March 2016).
Event News: One Piece Awardshas concluded. Check the results Here!
MangaHelpers > News > Anime/Manga News > Animanga in the News: 7/10 - 7/16
Homepage
Details
Archives

Here you will find a run down of this week's anime and manga news! This week, we've got famous Japanese manga artists currently located in Germany, two new movie trailers, three new films being scheduled to release this year, and an insecure mangaka who plagiarized & still won an award! Enjoy!

Meet the mangakas of "Afro Samurai" & "Dance in the Vampire Bund"

Nozomu Tamaki (Dance in the Vampire Bund), Takashi Okazaki (Afro Samurai) will be attending an Animagic show in Germany this July!

If you live in Germany or visiting Germany in the coming days, you should know that Nozomu Tamaki, the author and artist of 'Dance in the Vampire Bund' will be the guest of honor of the show called "Animagic 2011" in Bonn. The show will take place from 11th to the 18th of July 2011.

Monthly Shounen Gangan recently published the winner of the 18th Square Enix Manga Awards, a mangaka entitled "Compliance -Zettai Hourei Toshi-" by Matsuura Daiki. What they didn't know is that there were uncanny similarities to Ubukata Tou's "Mardock Scramble 104" that was compiled in "Mardock Fragments."

There was an uproar all over the internet as readers pointed out blatant plagiarism where Matsuura had lifted entire lines from "Mardock Scramble." 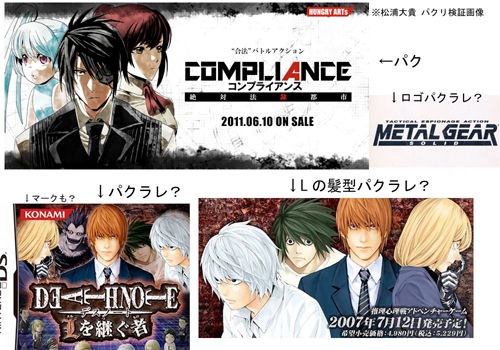 Square Enix has posted an official apology on their website, as well as an apology from Matsuura himself.

Otakon announced that it will not only host Fullmetal Alchemist: The Sacred Star of Milos's director, Kazuya Murata, but it will also be premiering the film during the event held on July 29 - 21 in Baltimore. The film will be screened with English subtitles.

Based off the manga by Hiromu Arakawa, Fullmetal Alchemist: The Sacred Star of Milos follows Ed and Al and an untold chapter about the lost holy land of Milos. The new film was directed by Kazuya Murata (assistant director on Code Geass: Lelouch of the Rebellion), with the script by Yuichi Shinbo. Kenichi Konishu adapted Arakawa's original character designs with BONES at the helm for animation.

The film opened up in Japan last Saturday (July 2) and FUNimation previously announced that they had licensed the film for a North American release. Kazuya Murata (Code Geass: Lelouch of the Rebellion assistant director) is directing off a script by Yuichi Shinbo (Whiteout). Kenichi Konishi (Tokyo Godfathers) is adapting the character designs from Hiromu Arakawa's original manga at the studio BONES (Eureka Seven).

Otakon's guest list just keeps expanding as they announced that MADHOUSE founder, Masao Maruyama, will be returning to the convention for a second year. Otakon will be held July 29 - 31st in Baltimore.

Back in 1972, Maruyama co-founded the studio with Osamu Dezaki, Rintaro and Yoshiaki Kawajiri. Since then, he recruited in some of the greatest talent to MADHOUSE and allowed them flourish - talents such as Satoshi Kon and Atsuko Ishizuka. Maruyama has also produced some of the greatest animes, such as Vampire Hunter D, Death Notes, Black Lagoon, Nana, Red Line and many many more.

According to Bloomberg, Sanrio will be spending up to 30 billion yen ($377 million) to buy the rights to a previously established character. This move is so they rely less on the popular Hello Kitty character. Should they find a suitable character, this will be the first time Sanrio uses a character that it didn't develop in-house.

“We want to buy a character that won’t harm Hello Kitty’s image,” Marketing manager Susumu Emori said. He declined to say if they're currently in talks with any candidates, but said that the company wanted to created a diversity among its character portfolio.

Emori noted that popular retail giant Walmart, which is now one of Sanrio's licensed retailers as of this year, may distribute Hello Kitty clothes, stationary and other merchandise. The merchandise will possibly reach about 3,000 out of the 4,427 stores in the U.S. by December.

With the release of the K-ON! movie a little ways away, some fans are counting down to the film's release in a variety of ways. Now Japanese broadcaster TBS has a special K-ON! clock for the iDevices so fans can do the countdown with the character Azusa.

The app is available for free through the iTunes Store but is a beta and in Japanese only. It includes a clock, and an alarm. In addition the description promises that something will possibly happen on special days and on a band member's birthday. Fans may have to wait for a little while to see what happens as the next band member's birthday is Ritsu's which is on August 21st.
The film will open in Japan on December 3rd.

1st of Golden Age arc's 3 films to open next January

The official website for the Berserk anime film project began streaming the first teaser trailer on Friday at 10:00 a.m. in Japan (Thursday at 9:00 p.m. EDT). The Movies Yahoo! Japan website began streaming a teaser trailer earlier on Thursday, but that version was restricted to viewers with Japanese IP (Internet Protocol) addresses.

The title of the first part, Berserk Ōgon Jidai-Hen I: Haō no Tamago (Berserk Golden Age Arc I: Egg of the Supreme Ruler), was revealed last week. The first film in the three-part retelling of the Golden Age arc of Kentaro Miura's manga will open in Japan next January.

Pictures and illustrations from manga about space launched with space shuttle Atlantis.

On the 9th of July, 00:29 hours, space shuttle Atlantis launched into space. It brought with it two photos from the live-action movie adaptation of Koyama Chuuya's "Uchuu Kyoudai" as well as an illustration of Mutta drawn by Koyama himself.

Space shuttle Apollo will be retiring after this mission, its final flight in the 30-year-long space shuttle project that had begun with its maiden voyage on the 12th of April, 1981. Up until now, bringing items unrelated to the mission at hand was not allowed, the 2009 Japanese Experiment Module "Kibou" for the International Space Station, has allowed for civilian utilization of space. Thus, just that little bit of space on Atlantis was granted for Mutta and Hibito to "board."

A representative from Lagrange, a company involved in space utilization, commented, "Even as we deal with the great impact of the disastrous earthquake, we wanted to load our dreams onto the final space shuttle and launch them together into space."

The filming for "Uchuu Kyoudai" ended on the 1st of July, and the pictures that were flown into space were taken that day. These pictures as well as Koyama's illustrations will return to Earth on the 20th of July, the same date that man first stepped on the surface of the moon 42 years ago.

The PlayStation Home Network for the PS3 will be hosting the upcoming "Macross Frontier Super Live" concert. Included will be 3D renditions of the shows starring females, Ranka Lee and Sheryl Nome, performing for free in Japan.

A venue had previously been created for the concerts, including special "guard training" and free screening of the anime within the Playstation Home. Macross Frontier will run until July 21st.

If you would like to help in finding and translating news of this nature, please contact saladesu via PM ^^ Please, feel free to PM saladesu any interesting bits of anime or manga news you find floating around the internet, too.

0 members and 1 guests have thanked Asahina for this news

[Permalink]
Plaigerism is always retarded - especially when it's dialogue & artwork that is stolen from a source. In manga, when you're a mangaka, there is no such thing as "references" or "works cited". You jus put the information as unique as possible in order to refer it as your own original work.

As for the trailers, I'm not a big FMA fan, nor am I K-ON fan.
I am a Berserk manga fan. I even play those 3D games on my PS2.
I'll be looking forward for this Berserk film.

As for the Germany event, I hope some MHelpers members living in Germany would be kindly enough to attend it and tell us how it went...

[Permalink]
Well, Plagiarizing isn't retarded, it's more beneficial as long as you don't get caught.
I think it is just retarded when you make it too obvious that you plagiarized is all.