Like us on Facebook, follow us on Twitter! Check out our new tumblr page. :)
Manga News: Toriko has come to an end; but be sure to swing by and share your favourite moments from the series!
Manhwa & Manhua News: Check out the new Manhwa and Manhua shout-out (March 2016).
Event News: One Piece Awardshas concluded. Check the results Here!
MangaHelpers > News > Shout-Outs > Mangahelpers Featured Manga: 8/3 - 8/17
Homepage
Details
Archives

Hello everyone!! Welcome to the next great installment of Mangahelpers Featured Manga News Post. :) This week we have our first Shounen Ai series, an alternate universe series about vampires, and two mythological series that deal with gods and demons. Hope you enjoy!

Haru goes to Canada for vacation with his mother and discovers that she is raising an abandoned boy, Ren. As Haru, Ren is attached to the dogs owned by Haru's mother and they start their friendship from that common point.

After coming back to Japan, Haru gets involved in a car accident with his parents, being the only one to survive.

The story shows how Haru manages his life after the accident, having to take care of his brothers and a teenager Ren that arrives in japan suddenly.

Asclepius' Thoughts:
It's a nice story about two boys, one of them an abandoned boy that speaks almost nothing and spends his days running around with dogs. If you expect some romance here, there is nothing. It's purely brotherly love. There is a tragedy next, a time skip and then we see an adult Haru having to take care of two younger brothers and... Ren, the abandoned boy. And it is around this scenary that the story develops.

The art is nice and clear. The author gets you attached to the main characters on the first chapter and explains the story during the timeskip well. Good shounen-ai with a real background story. Warning for the "Awwww!" moments.

"Stop your evil deeds and take the right path!" That is the creed of Youko Tama and her younger step brother, Jinka Sendou. The two demon siblings travel the country to stop the deeds of all evil doers, along with a scardy cat swordsman they picked up along the way, Hyoudou Shinsuke. Their travels lie with many twists and turns, as well as wacky characters they'll meet along the way.

My Thoughts:
From the author of Hoshi wo Samidare ( Lucifer and the Biscuit Hammer ), MIZUKAMI Satoshi brings usSengoku Youko. A superbly well written series that blurs the line between humanity and Youkai (demons) and asks the reader just who are the true monsters of the story.

Youko Tama and her younger step brother, Jinka Sendou are traveling the world trying to try and purify it of evil- doers. Their justification for doing this is quite different though. Tama, a fox demon loves humans and cares deeply for them and their safety. Jinka, a human on the other hand seems to hate humans and wants nothing more than to become a demon himself. It may not be the most original set of circumstances, but it's well done and makes learning about the characters fun.

A long the way, the two siblings of course encounter numerous obstacles and pick up and befriend other unique characters with their own problems and objectives. But unlike your other typical "journey" series, this one doesn't go off on wild tangents. All of the characters and situations are there for a reason and impact the main theme of this series

All in all, Sengoku Youko is a pretty good series. The story flows incredibly fast, is fun and action packed.
------ Manga information -------- 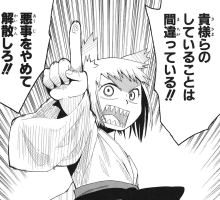 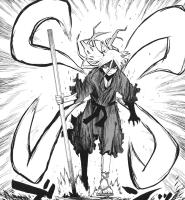 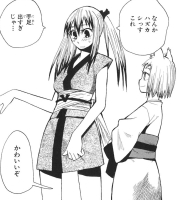 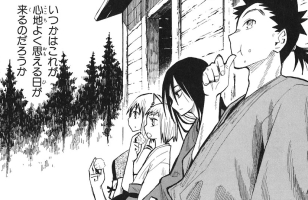 On a trip to look for his brother, a hungry Hachiya Rei stops at a shrine to pray. It is just his luck that he is accused of stealing money from the shrine and forced to work to pay off the amount stolen. However, the real thief turns out to be a daemon, or a god turned evil! An encounter with the daemon unleashes Kagutsuchi, the god of fire, concealed in Rei. As Kagutsuchi's proxy, Rei can use the god's holy fire to purify daemons, but there's a side effect...

My Thoughts:
Another supernatural series that borrows heavily upon mythology. Hi no Kagutsuchi is about a battle between heaven and earth with the future of the world is a stake. And what more could a person want?!

Having only been able to read a small portion of this series at this time, there really isn't that much I could say at this time without giving away too much of the plot or just rehashing the summary. Though I can say that the artwork is above average and the story is engaging. Plus the head priest Takama Suou, although not as quite aloof, totally reminds me of a certain shop owner from Kubo Tite's Bleach - which is never a bad thing.

Lark, is different from the rest of the kids. He has red eyes just like Vampires do and he is bullied by the other kids for that. One day he meets Setz a genuine Vampire of a Noble clan who is the only one that doesn’t call him monster or bully him. Eventually they become friends but when an incident happens, Setz does not want to lose a friend so he invites him to his home... The world of Vampires. [Easy Going Scans]

NOTE: This project's author changed, and the artist re-designed it from the start. Not only has the art changed but so has part of the storyline.

My Thoughts:
Another interesting webtoon. :) This one revolves around vampires ( and other "monsters") who have left the human world and created their own due to persecution and hatred for their races. It's under this premise that we are introduced to Lark, a boy who lives with foster parents and is treated like an monster because his eyes are red just like vampires. One day, he meets a strange boy named Setz who has the same colored eyes as him and a unique bond is formed. Fearing that Lark really is a "monster", his foster parents decide that they have had enough and are about to send off to an orphanage when Setz invites him to his home world... and thus the story begins.

Crepsecule, for the most part, is a pretty innocent little story: two children that come from different worlds and yet share the same problems becoming friends. However, things definitely change as the story develops and new characters are introduced. It's not just about those two characters, but a whole new world filled with intrigue, deception, and conspiracy. Not to mention that there are some pretty deep feelings and emotions hidden just beneath the surface that the main characters have to deal with. And with the story still being so young, there are just a ton of possibilities for further plots - definitely a story I look forward to continue reading and seeing how it all unfolds. 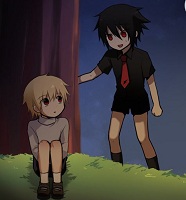 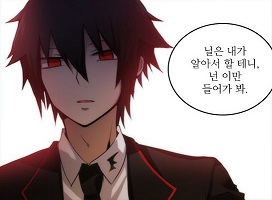 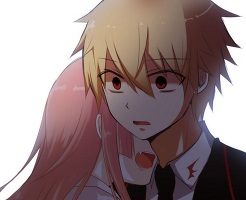 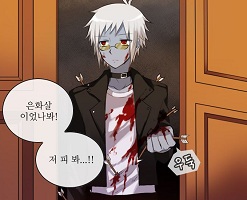 [Permalink]
nothing for me this time :(

[Permalink]
I noticed that there are a lot of Korean Webtoons now. Is that what the writers are preferring as their medium these days?

[Permalink]
@ babs - the webtoons seem popular enough although I'm not sure of the specifics.
I'm not sure how much the author or aritsts make per chapter.

Take example Noblesse webtoon, its branched off into a novel version and a published version comic will be out as well from the popularity of the free online webtoon version.

I presume that the published version are the preferred ones, while using the online webtoon format is a much less risky way of getting the author / artists into a newer comics market.

Crepuscule - Is really a fun read and very enjoyable. I like the main character and the others. Setz another main lead, gives the impression or feelings you get from Sasuke from the popular series Naruto.

Actually comparing the characters is kind of eerie.

So Naruto Fans should pick this up.