Like us on Facebook, follow us on Twitter! Check out our new tumblr page. :)
Manga News: Toriko has come to an end; but be sure to swing by and share your favourite moments from the series!
Manhwa & Manhua News: Check out the new Manhwa and Manhua shout-out (March 2016).
Event News: One Piece Awardshas concluded. Check the results Here!
MangaHelpers > News > Game News > Mangahelpers Video Game News Digest #1
Homepage
Details
Archives

Starting today, Mangahelpers will have a monthly news post about video games. This new feature will provide information about games and hardware from Japan and Asia. ^_^

Here is the news from August:

Analysts Made Their PS Vita Predictions

In a Bloomberg report, SMBC Nikko Securities analyst Kazuharu Miura predicted that Sony will sell 2.5 million Vita units and 7 million software units by the end of the current fiscal year (March 2012). However, he added that it would depend on whether Sony releases interesting software for the handheld. In that same article, Ace Securities analyst Hideki Yasuda also commented that video game developers are having a difficult time developing games due to the Vita's high resolution.

Miura also predicted that Sony will lose ¥5,000 per system at the beginning but the loss will decrease to ¥2,500 by March 2013. By then, he believed that 8.5 million units of Vita and 28 million games will be sold.

The Vita will be out in Japan at the end of the year while NA and Europe will have it early next year.

For those people who did not have a great experience with online play, Nintendo might have an answer for you. They has filed a patent for a "Massively Single-Playing Online Game" in which a player can go play online without interacting with other players. Even though you may not interact with another player, your actions can still affect the gameplay mechanics. For example, you can affect the game economy if you buy a large quantity of a certain object, which makes it rare and therefore, more expensive for other players. Even though players cannot interact with each other directly, they can send NPC messengers to relay messages.

Just a reminder that this is just a patent so Nintendo may not actually implement this idea to any of their games just yet.

British star, TJ Ramini, posted on his twitter account that he will voice a character named Salim, who is a "friend of Drake's who will help him on his quest!"

Kyubey wants you to play the game

Speaking of Namco Bandai, they will also release an anime crossover video game called Heroes Phantasia. The series are included:

According to the story, there are two worlds - the real world (mostly in Japan) and the world of Adroas. The latter is facing a great threat so characters from different anime series arrive there to prevent it. The battle system is turn-based and there will be a four-player party.

The PSP game will be out in Japan this winter.

Wii's JRPGs Might Arrive in NA under One Condition

Will Nintendo of America bring these games over?

In an IGN's interview, Nintendo of America President Reggie Fils-Aime said that the Nintendo will consider bringing The Last Story, Pandora's Tower and Xenoblade over to North America if the games do well in Europe.

Hopefully, they will sell well since the Wii hasn't have any good JRPGs lately. 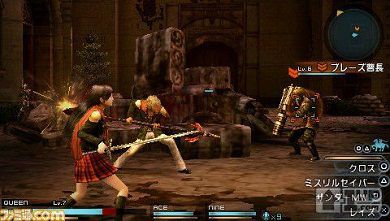 Originally announced as Final Fantasy Agito XIII in 2006, this week Square Enix released a free demo of the Japanese version of the game via PlayStation Network and its official Final Fantasy Type-0 website. Type-0 stands out from its previous Final Fantasy brethren due in part to its darker and more mature themes. This is evident even in the opening cinema sequence, after which players are thrown into a war-torn world where soldiers meet bloody deaths and chocobos are aggressive steeds willing to die for their riders. The demo features four missions with increasing difficulty ranging from "normal" to "nearly impossible", a battle party composition, creation of powerful spells via the Altocrystatium system, summons, and role of moogles. Type-0 will be released officially in Japan on October 13, 2011. Square Enix has not made any official statements regarding a western release of the game though many feel hopeful since the sequel to Final Fantasy XIII was announced to release only several months after Japan.

A PSP game is converted to the new PS Vita game console.

The Japanese game developer Prototype announced at its "Prototype Fan Appreciation Day 2011" event on Saturday that it will sell a Little Busters! Converted Edition port for Sony's PSP successor, the 'PS Vita'. The release date and price are to be determined. The bishōjo game brand Key released the original romance adventure game for personal computers in 2007, and it already ported it to the PlayStation 2 and PSP platforms.

The PS Vita (960x544 screen with 520,000 pixels) will actually have better graphics than the original computer version (800 x 600 with 480,000 pixels). The game's baseball practice, cafeteria serving, target-shooting, and other mini-games will be updated so the user can play them exclusively with the PS Vita's touch screen (or with the regular buttons if the user chooses).

Since OnLive first launched in the US in 2010, its expansion has largely been limited to platforms like HDTVs, iPads, and Android-based tablets. On August 11, 2011, OnLive announced it would be debuting in the UK on September 22, 2011. OnLive gives gamers access to its library of games, including Homefront, Assassin's Creed: Brotherhood, and Borderlands. Customers can purchase the games, rent them for up to five days, or get unlimited access to about half the service's catalog. When it launches, OnLive members will be able to try out free demos, voice chat with other players, or simply watch games in progress. It also will be "fully integrated" with its North American counterpart, allowing for cross-continent multiplayer. OnLive has said it will "steadily expand" throughout Europe and into other continents in the wake of its UK debut.

In one of his tweets, Kojima posted an interesting picture (posted above). In the background, you can see the words "Z.O.E 3DS". Is Konami finally making a new Z.O.E game? However Kojima commented that he was confused about what is going on though. Perhaps we will find out more information at TGS later this year?

At Gamescon, Sony announced that they are lowering the price on the PS3. The new price, which will be effective immediately, will be 249 Euros (Europe), 249 dollars (America) and 24,980 yen (Japan).

They have also introduced a new PSP model which will not have Wi-Fi. It will cost 99 euros. Sony has detailed the device’s specifications. For starters, the E-1000’s screen size will remain the same as as other PSP models, coming in at 4.3”.

The device will be a tad bulkier than the PSP-3000 and will also be a little heavier. While the PSP-3000 weighs 189 g, the E-1000 will weigh 223 g. Similar to the PlayStation 3 Slim model, it will have a black matte finish. Finally, as some have noticed, it will come with a Monoaural speaker, instead of Stereo speakers.

The device will lack Wi-Fi functionality. You’ll still be able to play digital content on it by downloading it from the PlayStation Store via Media Go on a PC, and transferring it to the PSP using a USB cable.

Twitter, Facebook, Foursquare, and Skype will be accessible as apps for the Vita. The apps will be free downloads on the Playstation Store.

Sony also revealed that all Vita software will be accessible online but some will still be available on the Vita memory cards.

The ten classes for the game

Namco Bandai revealed the ten classes that players can choose from when they play Dark Souls. They are: Warrior, Knight, Wanderer, Thief, Bandit, Hunter, Sorcerer, Cleric, and Deprived.

The company also released a trailer showing off some of the bosses:

Pursue your true self on Vita

In the latest Famitsu issue, Atlus confirmed fans' speculation that they will make a Persona 4 remake, which is heading to Sony's upcoming handheld, Vita. The port, which is called Persona 4: The Golden, will be updated with the following:

There's something about Mari... or Marie

Unlike Persona 3 Portable, Atlus has confirmed that there will NOT be a female main protagonist. The game will be out in Japan next spring.

In surprising news, Atlus will be collaborating with Arc System Works (maker of Guilty Gear and BlazBlue series) to make a 2D Persona fighting game called Persona 4: The Ultimate in Mayonaka Arena. The game will take place two months after the events in Persona 4 in which characters from Persona 3 and Persona 4 will participate in a fighting tournament, P-1 Grand Prix, hosted by Teddie (Kuma). So far the confirmed characters are:

Choose your character and fight!

The fighting game will have these modes:


Persona 4: The Ultimate in Mayonaka Arena will be available first in arcades next spring then arrive on the PS3 and Xbox 360 next summer for Japan.

Finally, Persona producer Katsura Hashino stated that Persona 5's preliminary development is almost complete so actual development will begin soon. The key staff (director Hashino, character designer Shigenori Soejima, and music composer Shouji Meguro) will be returning as well. He also added that the themes the staff wished to cover have been finalized and that they planned to try out more new things compared to Persona 3. Unfortunately, expect a long wait for Persona 5 to be out.

0 members and 1 guests have thanked riki for this news

[Permalink]
Persona 4 portable!! One more reason to get the ps vita..
Now if only they translate little busters...
I'm also interested in what nintendo is up to with that..
Thanks for the news!