Like us on Facebook, follow us on Twitter! Check out our new tumblr page. :)
Manga News: Toriko has come to an end; but be sure to swing by and share your favourite moments from the series!
Manhwa & Manhua News: Check out the new Manhwa and Manhua shout-out (March 2016).
Event News: One Piece Awardshas concluded. Check the results Here!
MangaHelpers > News > Site News > Mangahelpers Monthly Anime Recommendations!
Homepage
Details
Archives

Hello everyone and welcome to Mangahelpers next Monthly Anime Recommendations!

Here the different staff members will provide you with detailed information regarding Anime/Movies which we think of as worth watching and highly enjoyable.
Our Reviews will feature the Story, Characters, Animation, Music and a concluding Rating.
Now without further ado let's get started. We hope you will enjoy reading it!


Code Geass: Lelouch of the Rebellion

Hello, my name is Josef K., this is my review of Code Geass, both season one and season two. It is by far one of my favorite anime, I love how multiple genres just merge into one big anime festival of awesomeness! From episode one it's just a thrill ride, the best part is that you feel like you are part of the whole thing as it goes on. It takes some aspects from Death Note, smart protagonist and basically and literally is one big chess game!

Without further ado, I really would be glad if some of you take the time to watch it and I hope that it will leave a similar impression to you as it did to me. It may also help you to find a new anime that you have been looking for. I just want you to enjoy this review and enjoy the anime even more. 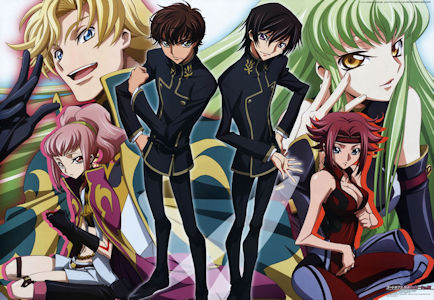 Story
Easily one of the best roller coasters I have ever read. Twists and turns in every episode and that is a fact. It an age when Japan is conquered by the Holy Britannian Empire, which is a fictional empire in the world of Code Geass, the story seems like one great war that is still ongoing. Japan is now called Area 11, the people are called Elevens, they are striped of their nations and are forced to be looked at something like slaves, unlike them the invaders from the empire are using their land to enjoy the everyday life that they have. One of the princes of the Britannian Empire has been exiled and now resides in Japan, or now called Area 11, he is a very intellectual person, loves playing chess, is part of the Student Council, one of the smartest in his school where rich and high ranked Britannians go. His name is Lelouch Lamperouge, a name he took to conceal his real identity. The story is him trying to overthrow the great empire by beating some of his family members and mostly his great friend Suzaku. Lelouch got this idea after the great power of Geass was given to him by the immortal pizza loving witch C.C. The series is a mix of possible every genre that would make you cry, get excited, make you think and leave you with a wide open mouth and eyes at the end of it.


Animation/Art
It has a wonderful take on the world of mecha. The robots and mechas are drawn in a very distinct manner that makes them more great. Also the scenes are very well complied to enforce the drama, character reactions and scenery. A lot of the characters appearance wise will appeal to both the male and female audience, the main aspect I would say that the characters are drawn is cool. Fighting scenes usually involve mechas and those are the ones that are well animated, the action is something that is brought closer. Animation in all honesty was the the factor that will make you watch this anime, the story is the key factor, the things I mentioned are there as a bonus, at least to me. 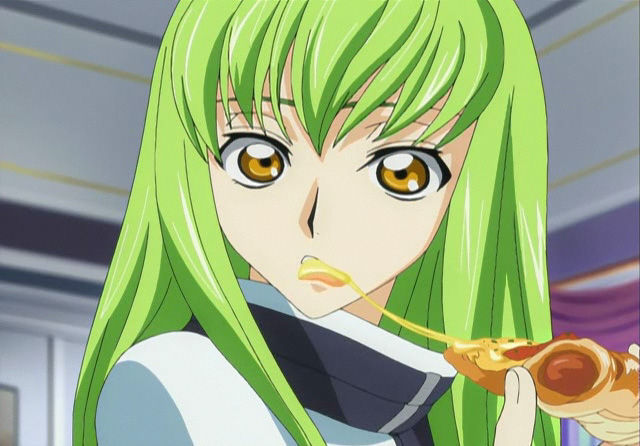 This Witch Knows What Is Good

Characters
Another strong point are the characters, they are together with the story the magic makers of the entire thing. Smart and brave most of them are in the state of pure awesomeness, everyone has a story to tell, everyone is connected, each of them as one are an entire story within themselves, together they are a variety of everything that needs to come together. Certain fans really feel attached to the protagonists and their stories, they also just want them to achieve whatever goal they have. That is the thing about these character you just pick one and root for him or her to be as epic as can be in the series.

It is a thing I never pay much attention to. I really liked the opening and closing themes that the anime had. Overall I think that the music of suspense surrounds almost every scene. The dramatic effect is there, of course this does not go for the opening which I loved, well the openings and ending in this case, they were masterful it really is something to keep your ears open to. Also the tune Continued Story which will appear in the anime is really the best piece of music from it.

Well this is one of the modern classics of anime, it will surely be remembered for years to come, this will be one of those anime that people will look back on and regard it as a must watch in 20 or something years. It certainly has a very good mix of genres and all of those things that I think give it a vibe of the best things from every kind of aspect. I would certainly give this my highest rating. Best part about this anime is that instead of a closing note I would tell you this: 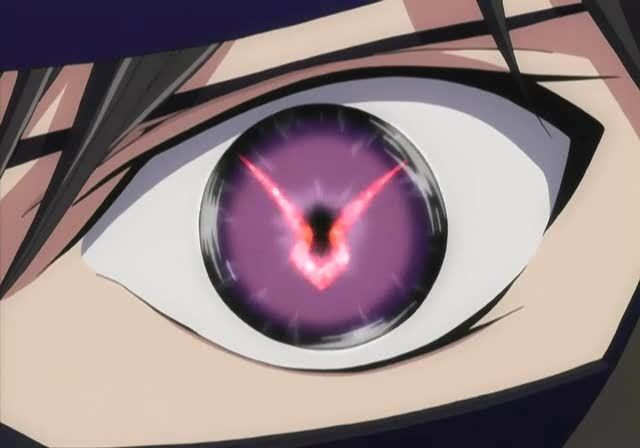 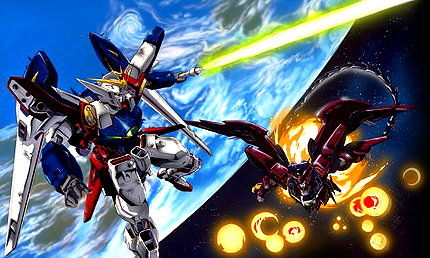 Hey, it’s HK here, and I’m reviewing an oldie, but a goodie, Mobile Suit Gundam Wing anime series. It’s quite a bit old school now, compared with the new animes out, but this is still really an excellent anime series. This is not exactly for everyone though, as it deals with war, and the most ancient and greatest problem that humanity faces, our own desire to fight, “Ever since man first stood upright, we’ve continued to write our blood-stained history”, and tackles how to end it, once and for all. It is highly sophisticated for those who are interested in war and/or in ending war forever.

Eight characters, five from the colonies and three from the earth, all seek the elimination of war once and for all, but who will be the one to achieve it, who will be the "Heart and Soul of Outerspace" and "Who everyone can believe in", ending the war between the earth and the space colonies?

Also, you do not have to know anything about the gundam series, nor seen any of the other gundam anime series, to watch this anime series.

Nor is this solely an outerspace anime series, as at least ~ half of it takes place on land (Earth), and lastly this has both action for us guys, and great characters and relationships between them for the ladies too. 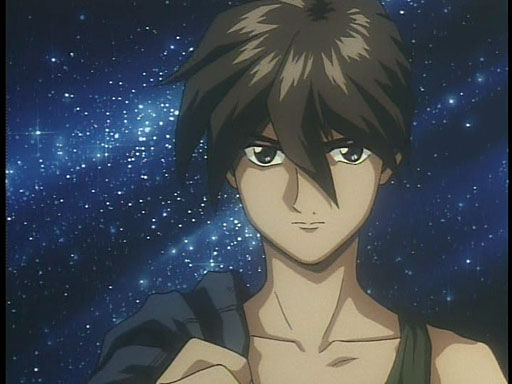 That’s not to say that it can’t be enjoyable to others, as it is quite interesting, even for girls too. Heero Yuy drives almost every girl crazy over. What guy tears up your invitation to your birthday party in front of everyone, and while walking past you, whispers into your ear, “I’ll kill you.” He, keeps that promise too, constantly trying to kill the girl who loves him. The other characters, are also very unique and interesting too, but none of them compare to Heero Yuy. He’s such a badass totally dedicated to his mission of eliminating the desire to fight, and war, from the world all by himself. Having broken over two hundred bones in his body, falling down a cliff while somehow only managing to break his leg and immediately get up as if it was nothing. “He then just goes and puts his broken bone back into place, oh man, that just totally grosses me out, I’m going to have nightmares over this one (Duo Maxwell).” Heero Yuy blows himself up without a second thought, somehow survives, and gives advice to Trowa Barton, ~“I wouldn’t recommend doing what I did, it hurts like hell.” Oh ya, the English actor for Heero Yuy, has a great sexy voice too, so enjoy girls! 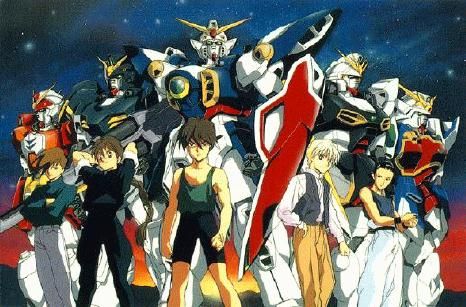 The Gundams’ and their Gundam Pilots, from left to right: Heavy Arms+Trowa Barton “I’m not paid to dodge” and “A guy should never make a girl cry”. Death Scythe+Duo Maxwell “Anyone who sees me, got a date with his maker, I am the God of Death” and “I may run and hide, but I never tell a lie”. Wing Zero+Heero Yuy “I’ll kill you, say goodbye Relena” and ~“Tell me Epyon! Where's my enemy?! Anyone who fights, is my enemy!”. Sandrock+Quatre Winner “I hate fighting, please don’t fight, I don’t want to kill you” and “Outer space has gone crazy, I’m going to destroy the colonies, please Heero, get away from the colony, I don’t want to destroy you too”. Nataku+Wufei Chang “I don’t kill the bleeding hearts of women” and ~“I will become evil itself, to rid the world of evil”. 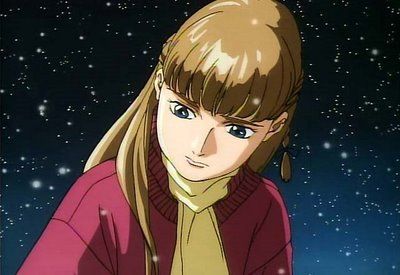 Relena Dorlon/Peacecraft “I believe that peace can only be achieved through total pacificism” and "Heero, come and get me!" 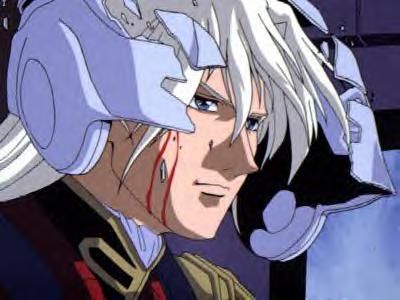 Epyon+Zechs Marquis/Mileardo Peacecraft “I’ll live the hard life of a warrior! Just watch me, I’ll live to the bitter end!” and “It is the stronger that create the weaker. It was the stronger colonies that had almost drove the weak colonies to destruction!” 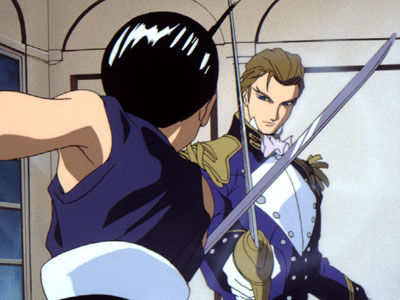 Tallgeese+Treize Khushrenada (in the background) ~"Winners slowly become losers, but then those losers become the new leaders" and "One must fight the battle to understand its beauty."


And the Beautiful Battle Babe (in the foreground, though Relena is beautiful too in the background, hehe)... 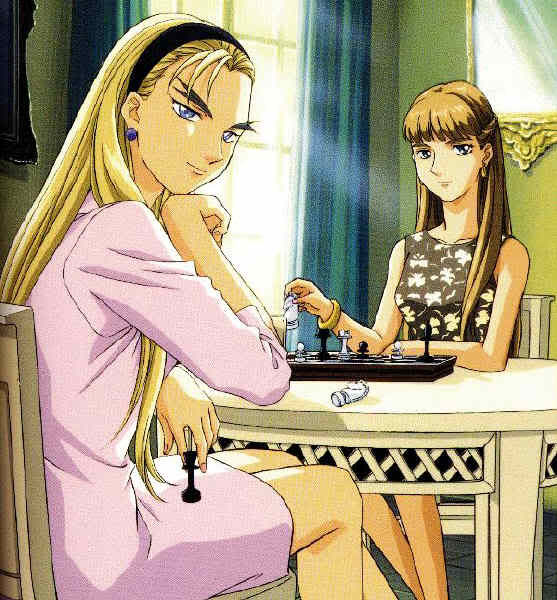 As you can see this is quite old school graphics, but surprisingly it's still quite good actually (the problem more lies with finding a good quality of vid of it if you're watching it online). The battle scenes are quite incredible, really epic in fact, you'll be glued to your seat just as adhesively as any of today's animes. Don't let this oldie fool you, this is not an anime to pass over and ignore!

It has some very nice music (Just Communication) as an AMV, but Beware of Spoilers:

White Relection as an AMV, but Beware Spoilers:

Sound Tracks (click on the other vids on the right for the other tracks):


The Overall Rating, My Scoring:

Now this conludes this months Reviews. If you feel like proposing a certain title or a staff member you would like to see a review from, just send me (naruto-niichan) a PM and we will definitely take your opinion into consideration!

[Permalink]
There wasn't an overall rating for Code Geass. xD

But I must agree, Code Geass for me was a surprise, excelent plot, and excelent development.

Gundam I didn't see so I can't tell by myself.
But it's popular and there surelly is a reason.
:P