Like us on Facebook, follow us on Twitter! Check out our new tumblr page. :)
Manga News: Toriko has come to an end; but be sure to swing by and share your favourite moments from the series!
Manhwa & Manhua News: Check out the new Manhwa and Manhua shout-out (March 2016).
Event News: One Piece Awardshas concluded. Check the results Here!
MangaHelpers > News > Anime News > Winter 2013 Anime Preview: Sasami-san@Ganbaranai
Homepage
Details
Archives 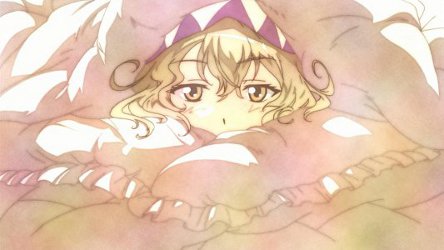 Sasami Tsukuyomi has been attempting to pass her first year of high school despite being a shut in. Fortunately, her older brother Kamiomi happens to be a teacher at the school she is supposed to attend. With the use of the “Brother Surveillance Tool” she can view the outside world via her computer. Theoretically it should be helping her adjust to interfacing with people again... Instead, it's giving her an up close and personal view of the very odd Yagami sisters who have various types of “interest” in Kamiomi. It looks like Sasami will have to take off her pajamas and go out into the “real” world to set things straight in Sasami-san@Ganabaranai.

New From the Director of Mahou Shoujo Madoka★Magica

2 members and 3 guests have thanked Kaiten for this news