Like us on Facebook, follow us on Twitter! Check out our new tumblr page. :)
Manga News: Toriko has come to an end; but be sure to swing by and share your favourite moments from the series!
Manhwa & Manhua News: Check out the new Manhwa and Manhua shout-out (March 2016).
Event News: One Piece Awardshas concluded. Check the results Here!
MangaHelpers > Manga > Browse > Binbougami Ga
Home
Chapters
Translations
Thread
RSS 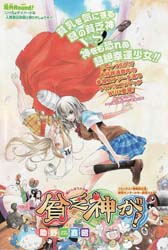 One-shot (published in Weekly Shounen Jump in 2008):
Sakura Ichiko has an extreme amount of luck, but has some personality issues. Momiji is a binbougami sent to reduce Ichiko's luck. Ichiko's luck is so strong that the unfair balance can cause the people around her to suffer. But Ichiko doesn't want to lose her luck...

Serialization: (serialized in Jump Square):
Sakura Ichiko is a 16 year old girl who leads a charmed life and is blessed with beauty, brains, and health. She has an abundance of “Happiness Energy”, which can make people happy, but at the cost of absorbing all the “Happiness Energy” from her surroundings. She has caused the energy balance of the world to become unbalanced and because of this, she becomes the target of a Poverty God named Momiji. Momiji goal is to remove Ichiko’s power of absorbing other people’s Happiness Energy and to return all the energy she has taken to its rightful place.