Like us on Facebook, follow us on Twitter! Check out our new tumblr page. :)
Manga News: Toriko has come to an end; but be sure to swing by and share your favourite moments from the series!
Manhwa & Manhua News: Check out the new Manhwa and Manhua shout-out (March 2016).
Event News: One Piece Awardshas concluded. Check the results Here!
MangaHelpers > Manga > Browse > Black Clover
Home
Chapters
Translations
RSS 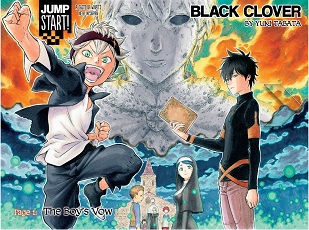 Aster and Yuno were abandoned together at the same church, and have been inseparable since. As children, they promised that they would compete against each other to see who would become the next sorcerous emperor. However, as they grew up, some differences between them became plain. Yuno was a genius with magic, with amazing power and control, while Aster could not use magic at all, and tried to make up for his lack by training physically. When they received their grimoires at age 15, Yuno got a spectacular book with a four-leaf-clover (most people receive a three-leaf-clover), while Aster received nothing at all. However, when Yuno was threatened, the truth about Aster's power was revealed-- he received a five-leaf-clover grimoire, a 'black clover' book of anti-magic. Now the two friends are heading out in the world, both seeking the same goal! [tethysudst]

Not much to review at the moment but I wanted to comment on something.

To be honest, I don't go out and look for new manga to read. All of the series I've ever come across have all been suggested to me. Despite being on a site called Mangahelpers, I have to admit that I'm not really deep into the culture. So take my opinion worth a grain of salt.

With that being said? All of the initial "h8" towards this series was unwarranted. My first exposure to this series was a review by one of my favorite YouTube reviewers. The gist of his review was this: "This is a ripoff of Naruto. There are too many similarities..."

and you know what? I believed him. That's right, I believed him without even giving the series a chance. So when I finally came around to actually checking out the first chapter (paying $.99 btw) my entire perception was clouded by prejudice. "This is just another Naruto clone", "This wont be anything different", "Look, even the plot is similar to Naruto"..

Now, I wont lie: The whole "I'M GOING TO BE WIZARD KING!" is obviously close to Naruto's dream to be Hokage. The story's premise is also annoyingly similar. Apparrently there was a "Wizard King" that stopped a monstrous beast from destroying the world. In fact, if you look at the first page (or so) the art depicting the Wizard King battling the demon/monster is very reminiscent of the first page of Naruto (in my opinion).

As of right now we're only 3 chapters into the series but I have noticed that Black Clover is slowly moving into its own lane. There are a lot of similarities to another series (It's a damn Shonen) but people who try to dismiss this as another Naruto clone are highly mistaken.

You have a somewhat interesting protagonist that fails at the key to the entire series: magic. He has a "rival" that, at first, comes off a little like Sasuke with the whole "I'm on a higher level than trash like you" mentality. Then we realize that the rival's comments were taking out of context and that the rival actually has a deep admiration for the protagonist. Go figure!

While the protagonist cannot use magic we soon find out that he has something else that makes him special. From that point on I think the story starts to carve out its own place in the genre.

If anything I think it's a mix between Naruto (obv) and Fairy Tail. I'll give it a proper review later on but I just wanted to give a quick like opinion piece.

So far, I really enjoy this manga. For people, who are saying it's similar to Naruto--the answer is: NO! Yes, there is the whole "I'm super weak but I'm not giving up!" line, but this can be seen in any shounen... So, I think it's unfair to hastily judge this manga, when it's totally different and unique. Overall, I like the manga, and will continue to read it.