Like us on Facebook, follow us on Twitter! Check out our new tumblr page. :)
Manga News: Toriko has come to an end; but be sure to swing by and share your favourite moments from the series!
Manhwa & Manhua News: Check out the new Manhwa and Manhua shout-out (March 2016).
Event News: One Piece Awardshas concluded. Check the results Here!
MangaHelpers > Manga > Browse > Blood+ A
Home
Chapters
Translations
RSS 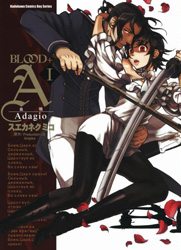 The year is 1916, when the Russian Capital was still called "Petrograd." Saya and Hagi arrive at the Russian Palace on their first mission in Russia at the turn of the 20th century. They go undercover by joining the palace orchestra in search for Chiropterans, but when Saya encounters failure after failure, she finds something is amiss. Can she solve the mysteries behind the Romanov family and the Great Rasputin? The grand battle between Men and Chiropterans ensues in the Romanov Imperial Court on the night before the Revolution!

Side Story of Blood+ manga. [ruggia]