Like us on Facebook, follow us on Twitter! Check out our new tumblr page. :)
Manga News: Toriko has come to an end; but be sure to swing by and share your favourite moments from the series!
Manhwa & Manhua News: Check out the new Manhwa and Manhua shout-out (March 2016).
Event News: One Piece Awardshas concluded. Check the results Here!
MangaHelpers > Manga > Browse > Bonten no Moribito
Home
Chapters
Translations
RSS 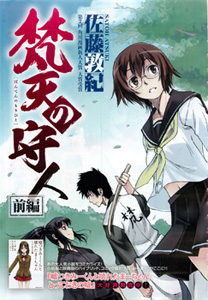 Once Demons and Humans were at war, and special warriors were needed to defend humans. Now a peace treaty exists between demons and humans. To uphold it human warriors now protect demons from other predatory demons. The Yosogi family is given this thankless task--and it's heir is young Akira, who can't even stand up against his older sister. But only Akira can sense the presence of demons, so he must become the next Demon Defender. But their grandfather has brought in a shy girl named Matsuri--and Akira is warned in a dream he must protect her at all costs!