Like us on Facebook, follow us on Twitter! Check out our new tumblr page. :)
Manga News: Toriko has come to an end; but be sure to swing by and share your favourite moments from the series!
Manhwa & Manhua News: Check out the new Manhwa and Manhua shout-out (March 2016).
Event News: One Piece Awardshas concluded. Check the results Here!
MangaHelpers > Manga > Browse > Break Hands
Home
Chapters
Translations
RSS 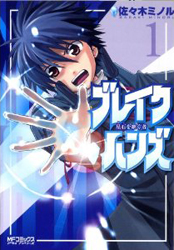 Zan Ruu lived a carefree lifestyle with his military father and brother. However, one day a mysterious airship attacked the capital, and danger approached Princess Emma. Zan hurried to rescue Princess Emma and the thing that appeared before him is......!?

To rescue Princess Emma, to seek the truth, the young man started his journey. A fantasy story revealed!!!