Like us on Facebook, follow us on Twitter! Check out our new tumblr page. :)
Manga News: Toriko has come to an end; but be sure to swing by and share your favourite moments from the series!
Manhwa & Manhua News: Check out the new Manhwa and Manhua shout-out (March 2016).
Event News: One Piece Awardshas concluded. Check the results Here!
MangaHelpers > Manga > Browse > Cross Over
Home
Chapters
Translations
Thread
RSS 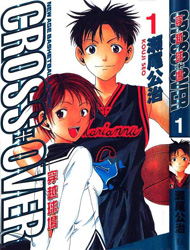 Ogata Natsuki is the best player on the Kakuchi Junior High Basketball Team. Which is not saying much because they couldn't even get through the 3rd round of the Prefectural Tournament from freshman year until the end of Junior High. For High School, his friends convince him to try out for the Number One High School Basketball team, Fujiwara Academy. So he goes to live with his aunt who runs a hot springs resort to go and try out for the best. Fujiwara Academy. The thing is... he's small. So people look down on him and he has trouble convincing people he's any good. Through one thing or the other, he ends up with Tachibana Mitsuki watching her school, St Mariannu High go up against Fujiwara Academy in a practice game. But the thing is, St Mariannu is very weak. Weaker than even his former school. Fujiwara is just toying with them and now they don't even want to finish the game. What will happen now? Will Natsuki ever be able to achieve his dreams of being High School Basketball's Number 1? And will it be with Fujiwara?