Like us on Facebook, follow us on Twitter! Check out our new tumblr page. :)
Manga News: Toriko has come to an end; but be sure to swing by and share your favourite moments from the series!
Manhwa & Manhua News: Check out the new Manhwa and Manhua shout-out (March 2016).
Event News: One Piece Awardshas concluded. Check the results Here!
MangaHelpers > Manga > Browse > March Story
Home
Chapters
Translations
RSS 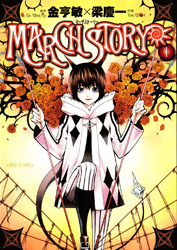 Never touch an object that is unfamiliar to you! Beautifully crafted antique objects sometimes harbor evil creatures called Il. The Il whisper to humans, using their negative feelings, such as resentment, envy, or hatred, to manipulate them. If a human touches an Il-possessed object, the Il can pass into them, devouring their heart and using the human's body as their puppet.

There are also humans who hunt the Il, called Syste Behard. March is one of those hunters, and she travels constantly in search of evil Il, fighting them using the power of the Il that has crawled into her own heart. But for how long will she be able to keep the Il inside her from taking over?
[tethysdust]

This manga is translated in english by the Etc team and you could also find the raw of the first volume proposed by the Blade of Heaven team.