Like us on Facebook, follow us on Twitter! Check out our new tumblr page. :)
Manga News: Toriko has come to an end; but be sure to swing by and share your favourite moments from the series!
Manhwa & Manhua News: Check out the new Manhwa and Manhua shout-out (March 2016).
Event News: One Piece Awardshas concluded. Check the results Here!
MangaHelpers > Manga > Browse > Oyasumi Punpun
Home
Chapters
Translations
Thread
RSS 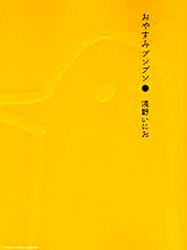 In his short career as a manga artist, Inio Asano has tackled a broad range of formats and genres–short existential vignettes, twentysomething dramas, mind-bending psycho-horror–always with a delicate emotional touch and an compelling eagerness to break stodgy storytelling rules. While his body of work is not yet large enough to suffer from legitimate accusations of repetitiveness, he nonetheless announced before this latest work, that he wanted to “start fresh.”

The result of this "rebirth" is the tragiocomedic Goodnight Punpun. Asano’s latent, surreal sense of humor, which could be seen percolating beneath the surface of his more serious works, is allowed to revel in its full potential, transforming what is—on the surface—a classic bildungsroman in wild and unpredictable ways. Witness the titular Punpun, who is depicted as a tiny, caricatured stick-bird, plopped in the midst of an otherwise realistically depicted, normal-life setting. The extreme depictions of his overactive imagination are only matched by even more bizarre characters.

Asano strikes a careful balance between exaggeration and realism in both theme and presentation -- imagine a stage performance of Looney Tunes by serious, skilled actors. The mood of the manga swings between slapstick and nightmarish, but never fails to be striking and evocative.