Like us on Facebook, follow us on Twitter! Check out our new tumblr page. :)
Manga News: Toriko has come to an end; but be sure to swing by and share your favourite moments from the series!
Manhwa & Manhua News: Check out the new Manhwa and Manhua shout-out (March 2016).
Event News: One Piece Awardshas concluded. Check the results Here!
MangaHelpers > News > Shout-Outs > New Manga Shout Out: 12/23/13 - 12/29/13
Homepage
Details
Archives

Welcome to the next New Manga Shout Out. This weekly article introduces you to manga that are new and/or have not been scanlated yet. This week features a pair helping heroes with problems, modified humans fighting aliens and a restaurant serving peoples' last meal. Remember, if you like any of the series, favorite them. Don't forget to also thank the various people who feed your manga addiction. ^_^ Translators and Scanlators, please check out these series and see if you can spread some more manga love~ 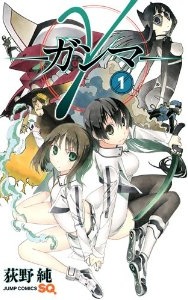 It's an age where aliens, monsters and other dangers threaten the Earth, and various heroes have risen to protect it. Supporting these heroes are the human defense forces, of which the sisters Kitajishi Miyuki and Yuri are a part. Specifically, their office is for hero consultation, and they help heroes solve their problems, but they also help evacuation procedures during emergencies. Yuri was formerly an immensely powerful and popular magic girl, but now she helps protect people in a more human way. In their first case, they consult with a hero who has lost his powers, and is trying to find a way to live as an ordinary human. 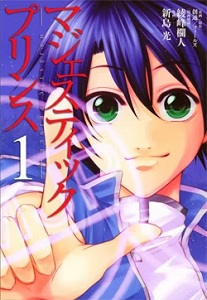 Humanity is expanding into space, and they have begun genetically engineering children to be able to adapt to the new environments. Hitachi Izuru is one of these evolved children, and he is sent to an elite academy. Izuru and his teammates are trained as pilots of mobile suits, and they will eventually play an important role in the war between humanity and the alien Wulgaru. 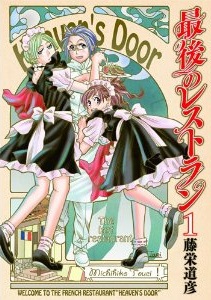 Sonoba Shinogu is the owner and chef of a restaurant called "Heaven's Door," an ordinary and not very popular restaurant. He has two part-time workers who dress as maids, Maeda Atari and Ariga Chie. Through some weird quirk, they begin receiving as customers famous people from throughout history. These people are transported through time and space to Heaven's Door, just before their deaths, and Shinogu has to figure out how to satisfy their order for their last meals. Famous visitors include Japanese historical figures, like Oda Nobunaga and Ryoma Sakamoto, as well as foreigners like Marie Antoinette.

=======================================================
Note to all scanlators: If you recently started scanlating a new manga series (with about 5 or less chapters released) and would like your manga to be shouted out in the next New Manga Shout Out, then please PM me. Please include:
This is what tethysdust said this week:
Quote:
I rather liked Ganma, which takes place in a world with superheroes. I was interested to see what issues heroes would want to consult about. Saigo no Restaurant was an neat idea, but I wonder how long they can keep the premise fresh. Majestic Prince might be fun for mecha fans (there's also an anime already). It was a little too fan-servicey to keep me interested, though.

If you haven't done so already, check out the scanlations of the mangas from previous shout outs which have been recently scanlated: adult drama Lucifer no Migite (MH link), comedy drama Dirty Christ Superstar (MH link), action adventure Hangyaku no Kagetsukai (MH link).

[Permalink]
I've been interested in Gamma....maybe I'll see if anyone else is translating it.

[Permalink]
I believe no one translating Gamma.