Like us on Facebook, follow us on Twitter! Check out our new tumblr page. :)
Manga News: Toriko has come to an end; but be sure to swing by and share your favourite moments from the series!
Manhwa & Manhua News: Check out the new Manhwa and Manhua shout-out (March 2016).
Event News: One Piece Awardshas concluded. Check the results Here!
MangaHelpers > News > Shout-Outs > New Manga Shout Out: 3/10/14 - 3/16/14
Homepage
Details
Archives

Welcome to the next New Manga Shout Out. This weekly article introduces you to manga that are new and/or have not been scanlated yet. This week features demon possessed warriors, a boy who transforms into a monster, and a Japan league soccer team. Remember, if you like any of the series, favorite them. Don't forget to also thank the various people who feed your manga addiction. ^_^ Translators and Scanlators, please check out these series and see if you can spread some more manga love~ 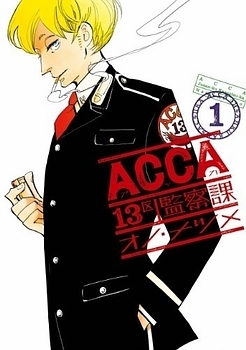 The kingdom of Dowa, which is subdivided into 13 states, is celebrating its monarch's 99th birthday. These thirteen states have many agencies that are controlled by the giant organization known as ACCA. Within ACCA, Jean Otis is the second-in-command of the inspection agency. His agency has 10 people placed in each of the 13 states, with a central office in the capital city. They keep track of all the activities of ACCA across the kingdom, and keep data on each state's ACCA office flowing towards the central office. Jin also often has business trips from the capital to the other districts, to check on the situation and personnel there. 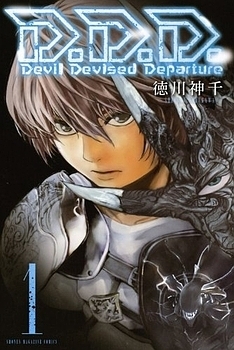 Since the formation of the "Black Knight Squadron," the kingdom of Galronia has expanded its military presence rapidly. The Black Knights were heralded as heroes, protecting the country from its enemies, but they are actually demon-possessed warriors. Not knowing this, young Julius sets out to join the ranks of the Black Knight. After being led to a battle royale against the other applicants, a strange mist fills the room they were all led into. Next thing he knows, he wakes up with a demon possessing his left hand... and the other applicants have turned into hideous monsters. With the help of the demon in his left hand, Julius must now save his sister and younger brother from the grasp of the Black Knights! 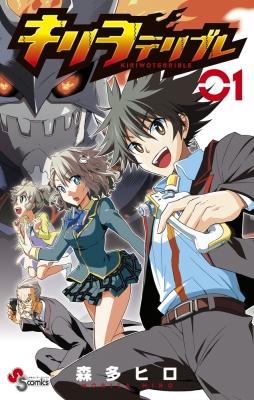 There are huge monsters wreaking havoc in Mikagura Kiriwo's city. Building on his father's work, Kiriwo has created a serum that turns him into a giant monster for a short time. He uses this serum to help protect the town from a monster one day--only to find that everyone thinks he's an enemy, too! Everyone at school and in the media hates the "black monster" that he became, due to the massive destruction he did to the town around him. A girl from his class even has to quit school, due to problems caused by the "black monster." Will Kiriwo be able to show that his monster form is really intended to be a savior? 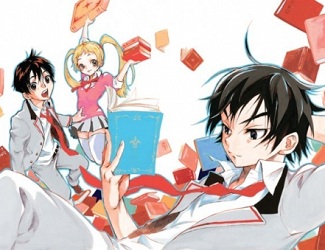 Abe Maria has joined the literature club at her new high school, bringing their total up to three members. The other members include friendly Asada and Shinkai, an observant boy who often sees truths that others miss. It also appears that Shinkai is secretly a novelist! Shinkai uses his observant nature to unravel the events around him and the motivations of all the key players, usually likening the situation to works of literature. 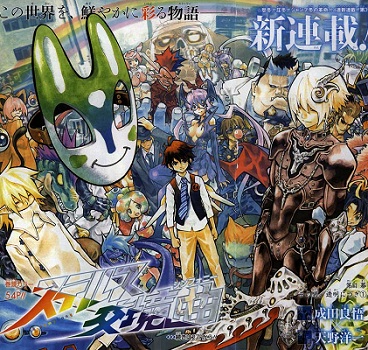 In a world where elves, dwarves, and invisible dragons live in harmony inside a metropolitan city, Jig sets out to find someone or something that can unleash the curse that he carries on his back. As he attempts to survive in the city of Jinbocho, a city filled with fantastic secrets and organizations, he encounters many powerful individuals who set out to either destroy him or save him. Will Jig be able to discover the true secret of his curse, or will it lead him to his own demise? 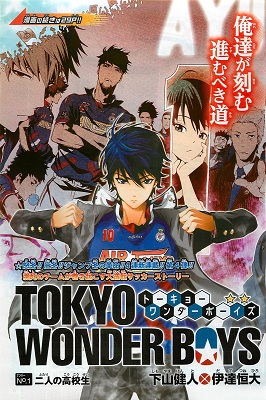 Hinomoto Kyuji is currently the biggest name in Japan's high school soccer league. Everyone expected him to go pro in the Japanese league, but he believes that staying in Japan would be a waste and thinks he needs to go abroad and enter the European league. Then, he meats Nanjo Ichimaru, another high schooler that eerily resembles Hinomoto's childhood favorite soccer player. Both Nanjo and Hinomoto get pulled into the SA Nishigaoka Japan league team, a weak and struggling team that has seen better days. Will these two be able to lead the team to victory?

=======================================================
Note to all scanlators: If you recently started scanlating a new manga series (with about 5 or less chapters released) and would like your manga to be shouted out in the next New Manga Shout Out, then please PM me. Please include:
This is what tethysdust said this week:
Quote:
Shinkai seemed like a kind of generic school club story with everyday mysteries. KiriwoTerrible was kind of funny in the way it pointed out that "heroes" sure do a lot of collateral damage. ACCA seemed to have a very slow plot, and the art was not really a style I enjoy.
Here's what DrCoke had to say:
Quote:
I loved Stealth Symphony. It does a fantastic job drawing a fantastic and unique world, and the characters are very lovable. The battle scenes look to be pretty top notch as well.

My opinion:
No really ecchi manga this week...
ACCA - 13-ku Kansatsuka - If you're a fan of Natsume Ono (mangaka of House of Five Leaves, Ristorante Paradiso) and don't mind the more slice of life/slower moving plot, then this manga is for you~
D.D.D. - Devil Devised Departure - If you're looking for a supernatural action manga, then this is for you...
Kiriwo Terrible is also another supernatural action manga, but more along the lines of comedy and the misunderstanding of the role of the big bad black monster.
Shinkai Tsuzuri no Dokkairoku would be a nice pick for those who want to read about school mysteries.
Stealth Symphony - on the other hand, this manga is for those who are in the mood for fantasy. Four chapters are already out and scanlated so it'll be easy for people to check it out.
Tokyo Wonder Boys is another new manga in Jump, but about soccer. The premise isn't that new (I swear I've read the same premise before) but if you like soccer (or football for non-Americans), then this manga is the one for you...